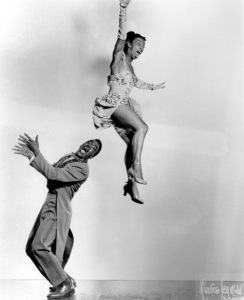 A 2019 update from The New York Times: “Norma Miller, who danced the Lindy Hop on Harlem sidewalks as a child, and as a teenager dazzled crowds on international tours in the 1930s and early ′40s doing the same kicks, spins and drops that had made it a Jazz Age jitterbug craze, died on Sunday at her home in Fort Myers, Fla. She was 99.”

Among the cultural prodigies who arose after the aviator Charles A. Lindbergh’s “hop” from New York to Paris in 1927 — hence the dance’s name — Ms. Miller, known as the “Queen of Swing,” was the youngest recruit and last survivor of the original Lindy Hoppers, the Herbert White troupe that broke in at Harlem’s Savoy Ballroom and popularized the Lindy Hop in Broadway shows, on tours of Europe and Latin America, and in Hollywood films.

You may also recognize Al Minns from these classic clips with dance partner Leon James. There’s more swing in the archives.

Plus, don’t miss The Nicholas Brothers in another one of the greatest dance performances ever filmed.

The Secret World of Foley

The Andrews Sisters – Boogie Woogie Bugle Boy Of Company B