When researchers decoded the chimpanzee genome in 2005, they explained that we share around 98% of our DNA with chimpanzees. But what does that specifically mean? Are We Really 99% Chimp? This episode of MinuteEarth illustrates how that one percent of difference—1.33% to be exact—is full of complexity when you look into the details. 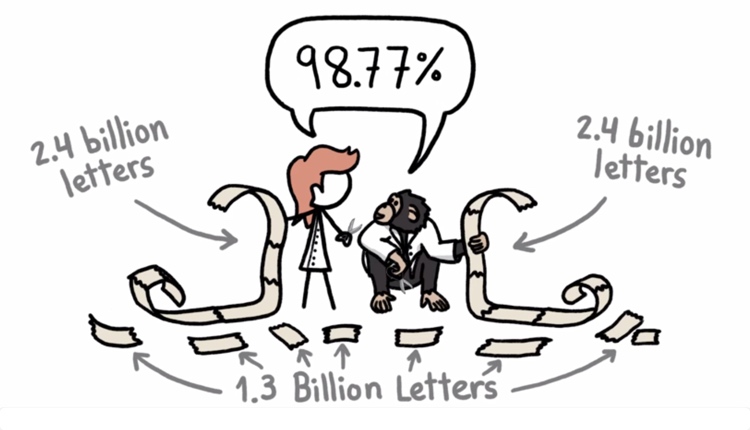 Another note: We also share a similar percentage of DNA with bonobos, and differ only 1.6% on average from gorillas. From Discover:

DNA, or deoxyribonucleic acid, is made up of just four molecules, called nucleotides: adenine (A), cytosine (C), guanine (G), and thymine (T). The DNA codebook for every species consists of billions of these letters in a precise order. If, when DNA is being copied in a sperm or an egg, a nucleotide is mistakenly copied wrong, the result is a mutation. If the mutation persists from generation to generation, it becomes a DNA difference—one of the many genetic distinctions that separate one species (chimpanzees) from another (humans). In genomes involving billions of nucleotides, a tiny 2 percent difference translates into tens of millions of ACGT differences. And that 2 percent difference can be very broadly distributed. Humans and chimps each have somewhere between 20,000 and 30,000 genes, so there are likely to be nucleotide differences in every single gene.

For more info in video form, watch the BBC Knowledge Explainer on DNA. Follow that up with How Mendel’s pea plants helped us understand genetics.