See what it’s like inside the Artificial Gravity Facility at Brandeis University’s Ashton Graybiel Spatial Orientation Lab. YouTuber Tom Scott tests his perceptions inside a rotating room “that mimics the effects of a gravitational force.” He quickly learns that his mind hasn’t yet adapted to the physics at play. And just wait until you see him throw a tennis ball. 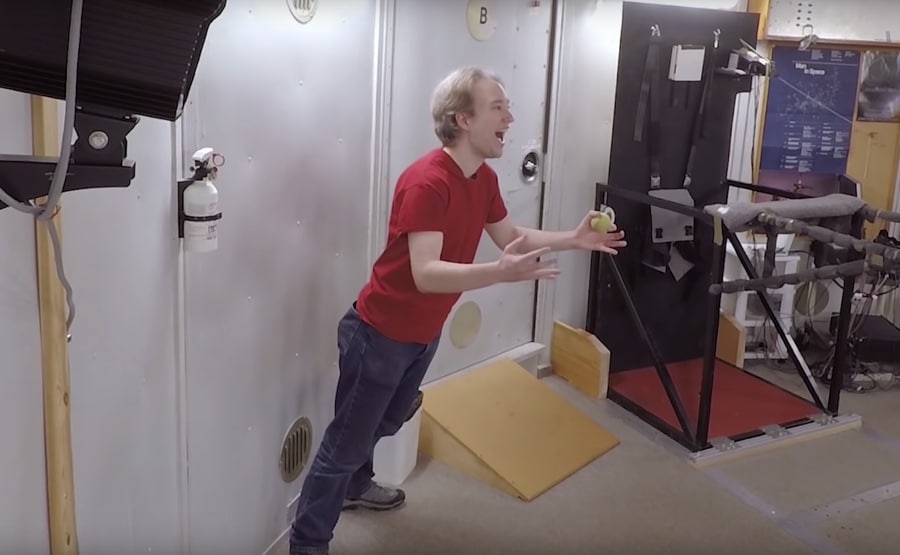 Why are scientists trying to create artificial gravity? As Senior Research Associate Janna Kaplan notes, “It is almost impossible to envision long-duration space flight without artificial gravity.” From Elizabeth Howell at Space.com:

Not having to bear weight on your feet sounds relaxing, but in the long term there are many health problems associated with it. Bones and muscles weaken, and other changes also take place within the body… Astronauts’ sense of up and down gets confused, NASA said, because the vestibular system no longer can figure out where the ground and the ceiling are…

Crewmembers also experience a disruption in their proprioceptive system, which tells where arms, legs and other parts of the body are oriented relative to each other. “The first night in space when I was drifting off to sleep,” one Apollo astronaut said in a NASA interview, “I suddenly realized that I had lost track of … my arms and legs. For all my mind could tell, my limbs were not there…”

Astronauts typically have an allocated exercise period of two hours a day in space to counteract these effects… Despite exercise, it still takes months of rehabilitation to adjust on Earth after a typical six-month space mission.

Next, watch This is What Outer Space Does to Your Body.