Levitate a ball on an invisible stream of air

The video above features one of the most visited exhibits at the museum, Balancing Ball, which explores “how an invisible stream of air can interact with solid objects—like planes and birds—to make them fly.”

Then make a ball levitate at home using a hair dryer:

This activity illustrates one of the reasons why airplanes fly. A flat wing will fly if it is tipped into the wind, so that it forces air downward. Newton’s third law tells us that for every action there must be an equal and opposite reaction: The reaction to the downward force of the wing on the air is the upward force of the air on the wing. You can feel this lifting force if you hold your hand out the window of a moving car and tip your hand so that it forces the air downward.

A wing that is curved on top will deflect air downward and produce lift even if it isn’t tipped. The explanation for this is essentially the same as the one given in this Snack. The wing collides with air, creating a region of high pressure in front of the wing. This high pressure produces drag, which is always associated with lift. The high-pressure air in front of the wing accelerates air over the curved surface of the wing. This air then flows downward behind the wing. Airplanes fly because their wings throw air downward. 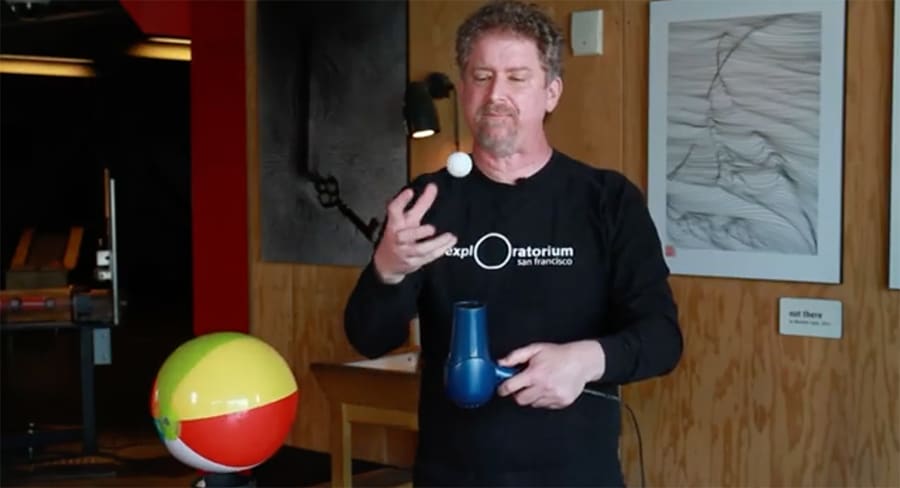 Next, watch Wolfgang Rueckner demonstrate the Coanda Effect using a wine bottle, a candle, coffee mugs, a hairdryer, a basketball, and more.

And watch these related aerodynamics videos next:
• Birds gliding through helium bubbles reveal an aerodynamic trick
• The physics of why birds fly in V-formation
• How to make an Air Surfing Foam Walkalong Glider