When David M. Bird left his job as a designer for LEGO Technic and Bionicle, he wasn’t sure what he was going to do next. It was only when he was sweeping his mother’s driveway, thinking, “Oh, did I make the right decision leaving?” that he found a new inspiration: A stick that looked like a bug’s face.

“And it kind of clicked then because leaves look like wings and a pine cone can be its body and sticks can be its legs, so I grabbed my glue gun and I made this bug, and I knew right then I could make some really awesome characters.” 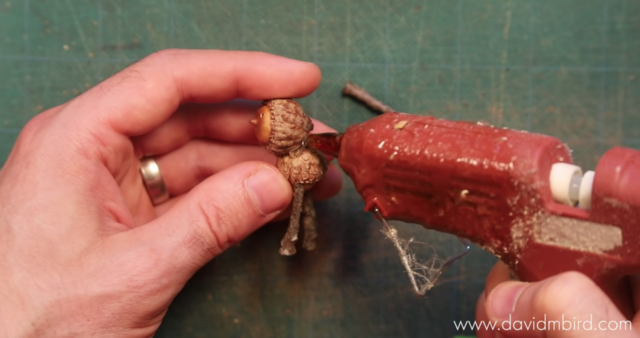 Bird is now pairing his Becorn characters—gentle and curious woodland creatures crafted from acorns, pine cones, sticks, and other natural materials—with real animals in his neighborhood. 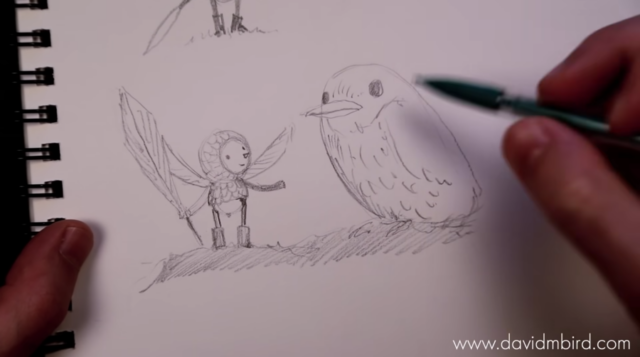 In the video above, the first in a series, he places his woodland acorn people into a verdant nature scene right next to the bluebird nest in his yard. 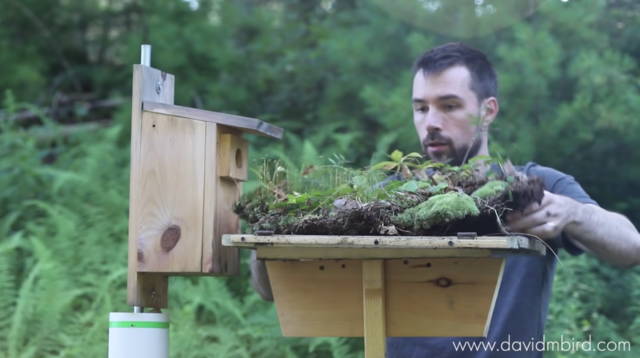 The platform’s wobbling is caused by a predator baffle:

“To protect from predators, I built the birdouse and baffle according to the recommendations by the Connecticut Audubon (.pdf). The second platform was only in place during photography sessions when I was able to monitor for predators.

“It’s recommended to check Bluebird boxes at least once a week. From my research online, I learned that bluebirds are actually quite tolerant of humans. I opened up the box briefly every five days, and stopped when they had feathers and there was risk of birds jumping out. I only opened the box when the parents were away collecting food.”

Patience was the key to catching a magical, story-like moment with his camera. Bird used a camera remote from inside his home as he waited and watched. 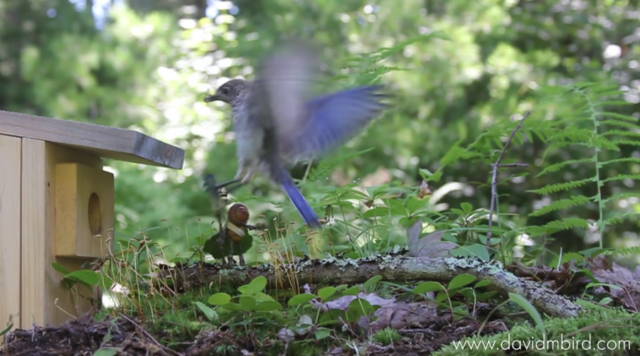 “I’ve since come to understand that it’s illegal in the US to collect migratory bird feathers without a license because it violates International Migratory Bird Treaty Act of 1918. The treaty makes it unlawful to hunt, take, capture, kill, or sell migratory birds. The statute extends to any bird part, including feathers, eggs, and nests. I found the bluejay feather on the ground, but there’s no way law enforcement could know that, thus the blanket regulation. There are plenty of bird species that aren’t protected though. Time to find some chicken feathers!” 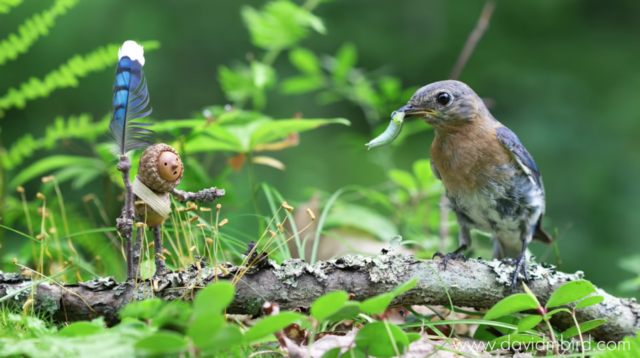 Watch these handpicked videos next:
• Samantha Bryan’s handmade fairies & flying contraptions
• How to needle felt a fox
• What is a fairy tale?
• Acorns, an animated micro-short series by Tonko House
• Acorn by Madeline Sharafian

The Genius of Play – Vital benefits of playtime in 9 animations

The Anomalies: The Acorn Woodpecker