Encased in amber: A tiny skull from the age of dinosaurs

Update: The scientific process continues to correct for new information. In this case, the information was evidence from a similar fossil. From Nature: “The paper covered in this video has been retracted and the contents of this video are incorrect. New evidence suggests that the specimen might actually be a lizard, and not a bird-like dinosaur.

The authors of the paper, published in Nature on 11 March, say that their original description of the fossil — a bird-like skull less than 2 centimetres long, its mouth packed with dozens of teeth — is still accurate. But they acknowledge that its classification as a dinosaur is incorrect…

Although the fossil is no longer thought to be the smallest-known dinosaur, [paleontologist Dr. Jingmai] O’Connor and [vertebrate paleontologist Andrea] Cau both say that it is still compelling because of its unusual combination of features.

From June 15th, 2020: A hummingbird-sized skull with tiny teeth is a rare find in science. This one, a previously unknown species named Oculudentavis khaungraae (now “of uncertain taxonomic placement”), was preserved in a lump of amber. Dr. Jingmai O’Connor introduces the 99-million-year-old discovery in Nature‘s Encased in amber: A tiny skull from the age of dinosaurs (now retracted). She explains:

“…paleontology, right now, is being completely transformed by skeletal fossils, fossil vertebrates, preserved in amber. When you have an animal preserved in amber, it looks like it just died yesterday. All the soft tissue in place, trapped in this, you know, window into an ancient time.”

First, the skull is dominated by two enormous eye sockets containing scleral ossicles — rings of bone that form the eye skeletons of birds… The opening at the centre of these ossicles is narrow, restricting access for light into the eye and providing strong evidence that Oculudentavis was active in well-lit, daytime environments.

Second, the jaws of Oculudentavis have many small teeth. This might seem odd, given the absence of teeth in today’s birds, but teeth are in fact common among early fossil birds. However, Oculudentavis has more teeth than other birds of the period, and these extend unusually far back in the jaws to a point just under the eye. On the basis of these facts, along with observations of the fossilized tongue, the authors suggest that Oculudentavis was a predator that mainly ate invertebrates. 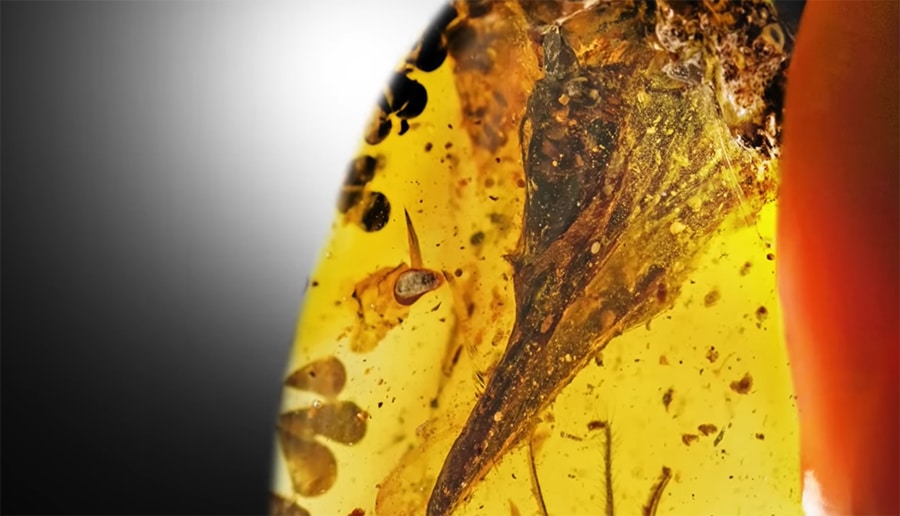 As O’Connor explains in the video, “if it wasn’t for amber, we wouldn’t know about this minute fauna at all.” Nature shares the science behind the Oculudentavis‘ preservation:

Fossilization of bones in sediments such as clay, silt and sand can crush and destroy the remains of small animals, and can flatten and decay soft parts such as skin, scales and feathers. By contrast, preservation of small animals in Burmese amber (which formed from the resin flows of coniferous trees about 99 million years ago) helps to protect their soft parts. A wide range of invertebrates and small vertebrates, including lizards and birds, have been found in Burmese amber. Specimens preserved in this material are rapidly emerging as an exceptional way to study tiny vertebrates from the age of dinosaurs.

Watch these paleontology videos on TKSST next:
• Dinosaur’s Feathered Tail Found Preserved in Amber
• Archaeopteryx and the Origin of Birds
• Dinsosaurs Among Us
• How do we know what color dinosaurs were?
• How did feathers evolve?

The life and evolution of the Woolly Mammoth