Building a wigwam, a time lapse

A dome made from tree saplings, grasses, bark, buckskin, cloth, and other available local materials, the wigwam was a seasonal structure used by many Native American cultures in the North Eastern United States. Historic Huguenot Street, a Huguenot historical society in New Paltz, New York, built an “authentically designed and constructed” wigwam on their land in 2017. This wigwam time lapse captures the build.

Wigwam is a term for ‘dwelling’ that comes from New England Algonquian word, perhaps specifically from the Eastern Abenaki word wigwôm.

A wigwam, wickiup or wetu is a semi-permanent domed dwelling formerly used by certain Native American and First Nations tribes, and still used for ceremonial purposes. The term wickiup is generally used to label these kinds of dwellings in the Southwestern United States and Western United States, while wigwam is usually applied to these structures in the Northeastern United States and Canada. Wetu is the Wampanoag term for a wigwam dwelling… The wigwam is not to be confused with the Native Plains teepee, which has a very different construction, structure, and use…

A typical wigwam in the Northeast had a curved surface which can hold up against the worst weather. Young green tree saplings of just about any type of wood, ten to fifteen feet long, were cut down and bent. While the saplings were being bent, a circle was drawn on the ground. The diameter of the circle varied from ten to sixteen feet. The bent saplings were then placed over the drawn circle, using the tallest saplings in the middle and the shorter ones on the outside. The saplings formed arches all in one direction on the circle. The next set of saplings were used to wrap around the wigwam to give the shelter support. When the two sets of saplings were finally tied together, the sides and roof were placed on it. The sides of the wigwam were usually bark stripped from trees. 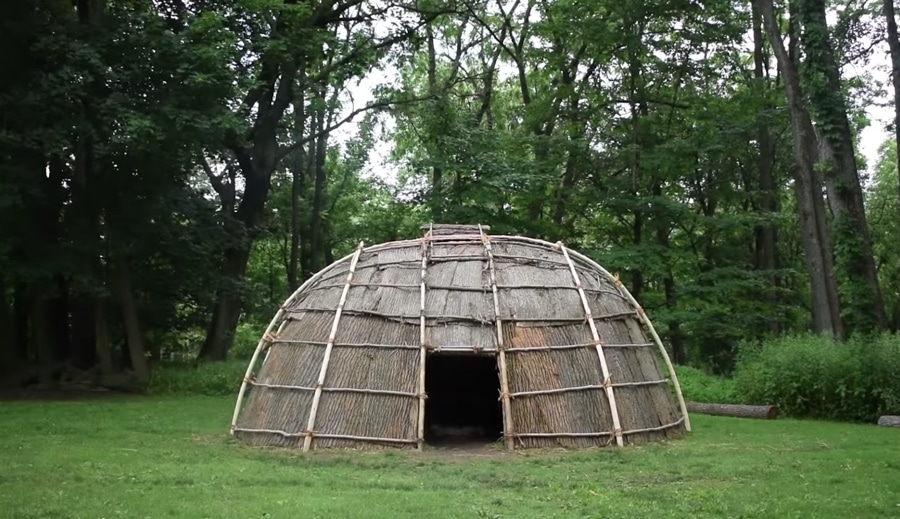 Watch these videos about shelter-building next: How nomads put together a ger (or yurt), the National Film Board of Canada’s How to Build an Igloo (1949), and Amish Barn Raising: Building a barn in one day.