With each curve into another hallway, cereal boxes fall… hallway after hallway until the falling boxes expand into a huge triangle of breakfast-filled dominoes.

As the last row falls in front of an awaiting crowd, a new 2021 world record is claimed by Long Beach Middle School in Long Beach, New York: Most cereal boxes toppled in a domino fashion.

“Long Beach Middle School students and staff hosted a food drive to collect cereal for local pantries in order to help individuals and families in need. As part of the event, they decided to attempt a Guinness World Records title, with students and staff members lining up boxes along the school halls after classes had ended one afternoon. They were aiming to collect 3,500 boxes to donate, however ended up getting more than 6,000!” 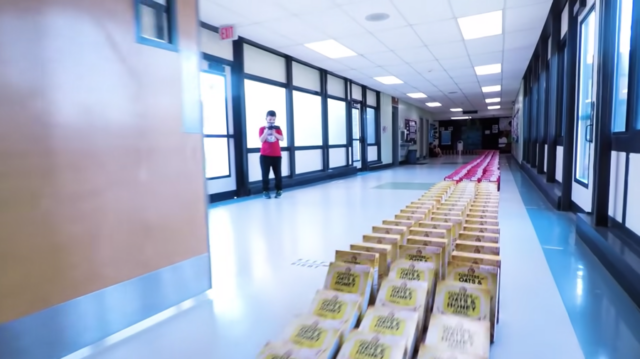 And from Long Beach Public Schools:

“’We had students that worked tirelessly these past three weeks, giving up lunch periods, day after day, to mark off every eight inches throughout the entire school, sort cereal by size, kind, and weight, transport cereal to different locations or test out different configurations that might or might not topple,’ Mr. Papetti said. ‘Whatever needed to be done, the students were there for it.’” 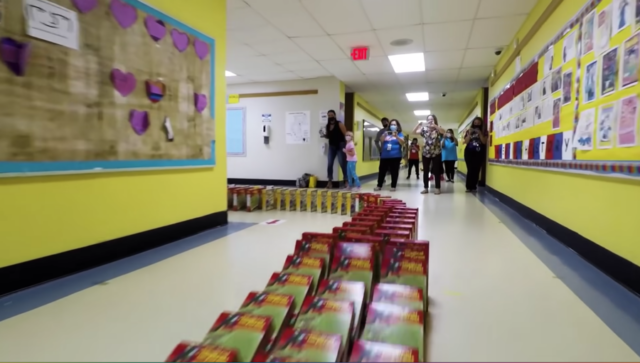 Watch these domino and cereal science videos next:
• The most amazing thing about domino chain reactions
• The Brick Double-Domino Effect Explained
• How to extract iron from your breakfast cereal
• Surface tension and The Cheerios Effect

The most amazing thing about domino chain reactions

Surface tension and The Cheerios Effect

How to extract iron from your breakfast cereal