This simple cardboard pendulum with a small magnet at the end swings and repels above a field of magnets. The awaiting discs appear to be facing up with the same pole that the swinging magnet has faced down so that the pendulum is pushed into chaotic motion.

The Things made of cardboard YouTube channel created this Chaotic Pendulum DIY physics demonstration. An explanation of the physics from Reference.com:

All magnets have both a north and a south pole, which causes them to either repel or attract one another depending on how the two poles are lined up. If the north pole of one magnet meets the south pole of another, the two will be attracted, but if either both north or south poles meet, the magnets will repel one another.

No matter what type of magnet, the opposite poles always attract while similar poles always repel. Each magnet sends out a magnetic field, which is positive on one pole and negative on the other. This magnetic field is the result of the movement of negatively charged electrons within the magnet. These fields are strongest directly at the pole, which is why the ends of magnets will so powerfully repel or attract each other. 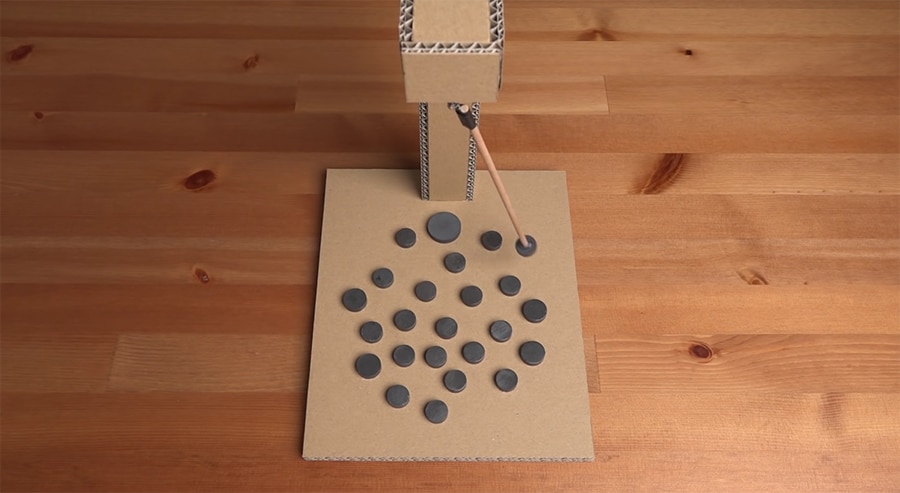 Previously from Things Made of Cardboard: The Coupled Pendulum, a physics demo and pattern distortions seen through a glass of water.

Plus, watch more magnet videos and pendulum videos on TKSST:
• Make Lissajous patterns with DIY sand pendulums or light
• Nowhere and Everywhere at the Same Time, No. 2
• Surprising interactions between copper and neodymium magnets

The surprising interactions between copper and neodymium magnets

The ORBIS FLY kinetic light system at the Leningrad Center

The Coupled Pendulum, a physics demonstration