An engineer with a masters in Materials Sciences, retired NASA astronaut Leland Melvin is a veteran of two Space Shuttle Atlantis missions (STS-122 in February 7–20, 2008 and STS-129 in November 16–27, 2009), and spent many years as a NASA educator, talking about science, technology, engineering, and math with teachers and students around the country. He tells his story in this Microsoft promo:

Even as a former standout athlete—he was drafted by the Detroit Lions in the 1986 NFL Draft—with a masters in Materials Sciences, Leland Melvin never dreamed of becoming an astronaut until a colleague at NASA convinced him to enter the trials. Despite a debilitating ear injury sustained during training, Leland served among the first flight crews that led America back into space following the space shuttle Columbia disaster.

You can read more about the Feb 1, 2003 Columbia disaster here and here. 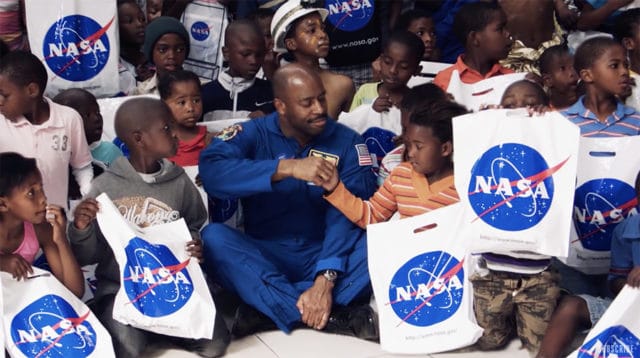 We love hearing personal stories from people who have achieved success despite adversity, and we love Melvin’s NASA photos. Here’s one, and here’s the other, which has been going viral: File under: Astronauts, Black and STEM, and the space shuttle program.