A thin acrylic tank is placed at the center of a well-lit table. Water is poured in and aluminum particles are added. When a small heater is installed in the bottom right of the tank, both the narration and the convective circulation begin.

In this convection cell demonstration, Harvard Professor Steven Wofsy explains “how buoyancy generation in a fluid can generate a circulation.” A video description:

The warm water above the heater rises up to the surface and moves over to the left side of the tank, where it starts to cool. Losing buoyancy as it cools, the water gradually returns to the bottom, where it completes the cycle by being drawn back into contact with the heater.

Convection cells happen all around us. Some examples can be found in boiling water, in the ocean, in the clouds, across Earth’s atmosphere, and on the surface of the sun.

One can draw an analogy with this demo and onshore breezes that occur along the coast on hot summer days. In that case, air heated by land rises up and is replaced by cooler air moving in from over the ocean. 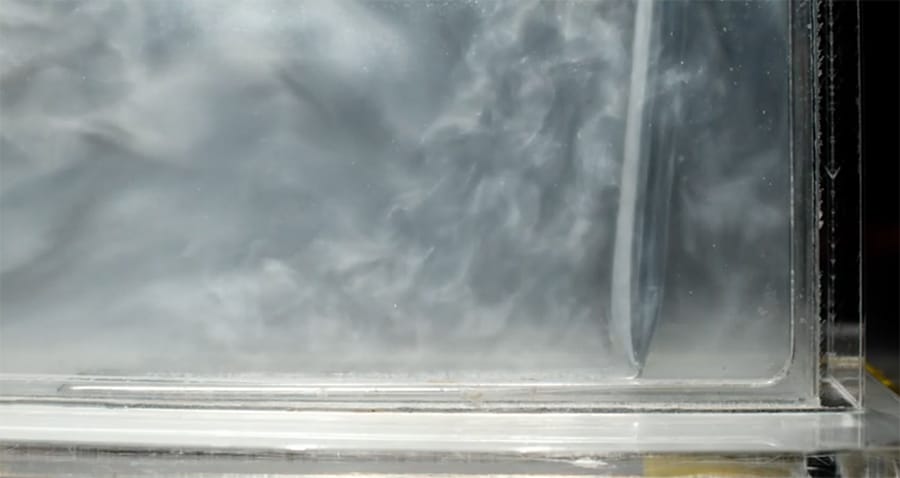 What is a convection cell? From Wikipedia:

In the field of fluid dynamics, a convection cell is the phenomenon that occurs when density differences exist within a body of liquid or gas. These density differences result in rising and/or falling currents, which are the key characteristics of a convection cell. When a volume of fluid is heated, it expands and becomes less dense and thus more buoyant than the surrounding fluid. The colder, denser part of the fluid descends to settle below the warmer, less-dense fluid, and this causes the warmer fluid to rise. Such movement is called convection, and the moving body of liquid is referred to as a convection cell.

Plus, watch more videos about fluid dynamics:
• Demonstrations of the Coanda Effect
• Birds gliding through helium bubbles reveal an aerodynamic trick
• A match being struck as seen with Schlieren technique.

And Why So Many Cloud Types? How to identify clouds.

Why So Many Cloud Types? How to identify clouds

Why Do Clouds Stay Up? – It’s Okay to Be Smart

Walter, an animation by Lorenzo Fresta

The incredible physics of ants and ant rafts

The Hidden Complexities of the Simple Match – Science Take

The Girl and the Cloud