While freediving along the Ningaloo Reef in Western Australia, underwater and wildlife photographer Alex Kydd happened upon a small and short-lived yet incredible-looking gathering of cownose rays, “a brown, kite-shaped ray with a long, whip-like tail.” From Kydd:

The rays were spiralling up and down the water column from the surface to 20 metres for approximately 20 minutes until they were not seen again. There have been few reports of cownose rays in the Ningaloo Reef region and over the last four years, this was my first encounter and it was by pure chance. The exact species of ray is speculative. After consulting with multiple ray experts, there still remains a lack of species information in the genus Rhinoptera.

Cownose rays are shy, feed on mollusks, and have a ‘wingspan’ of around 90 centimeters or 3 feet. The 36-second clip is accompanied by Chris Coleman’s Yearn.

Kydd also shared footage of the cownose rays in black and white, set to Finally by Caleb Etheridge.

Monterey Bay Aquarium explains that the animal’s “two lobes in front of its high-domed head… create a cow-nose likeness that gives this ray its name.”

The cownose ray is known for its long migration in large schools. It’s a strong swimmer, able to cover long distances. In the Atlantic Ocean, its migration is northward in the late spring and southward in the late fall. The population in the Gulf of Mexico migrates in schools of as many as 10,000 rays, clockwise from western Florida to the Yucatan in Mexico. 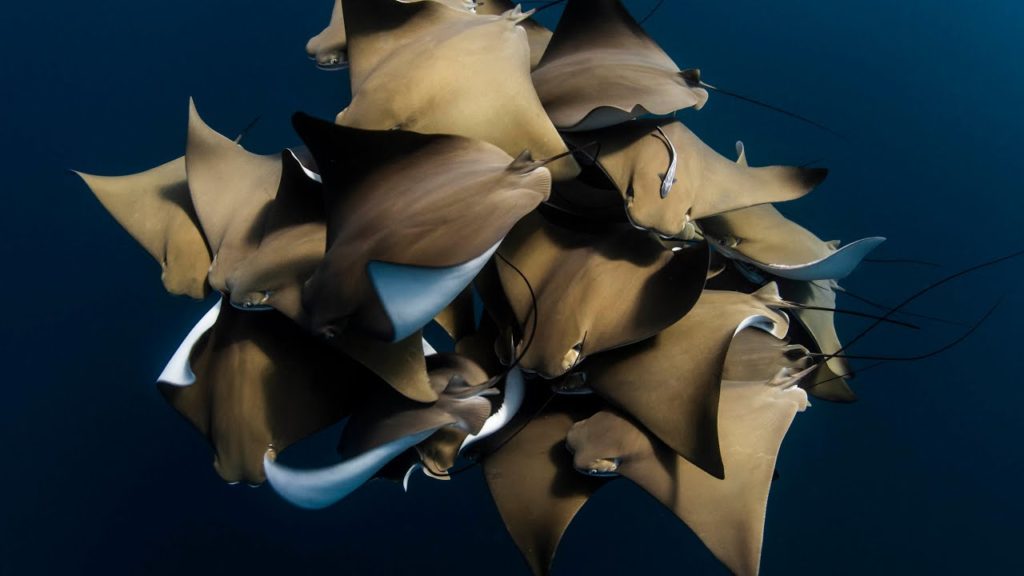 Watch these ray videos on TKSST next:
• The largest school of rays ever caught on film
• Discovering A Second Species of Giant Manta Ray
• California Devil Rays Leap from the Pacific

Malpelo: An Expedition, an underwater tour of an ecological wonder

How Do Sharks and Rays Use Electricity to Find Hidden Prey?

Giant eagle rays launch themselves out of the Pacific

Flamingos swim with stingrays in their hydrotherapy session