If you want to feed squirrels in a backyard, you could put a little bowl of food out. You can also glue a few nuts to a domino and wait 14 hours for a curious squirrel to knock it over, starting a Rube Goldberg chain reaction that dumps a bunch of nuts and seeds out for squirrels, chipmunks, birds, and raccoons to enjoy. YouTuber Creezy decided to try the latter.

But waiting around to record a Rube Goldberg machine isn’t compatible with enticing a squirrel to approach the starting element. And stopping other animals from setting off each section was a challenge, too. Creezy explains some of the Squirrel Feeding Rube Goldberg Machine‘s biggest challenges:

• Filming: I couldn’t get too close to the squirrels without scaring them off, so I built this machine in a circle around a 360 camera. I followed the action when I was editing the 360 footage, and even got some close-up shots with additional cameras.

• Animals: Instead of waiting inside for the squirrels to knock over the dominoes, I had to hide in bushes to make sure birds or chipmunks didn’t trigger the machine instead. Birds landed on all parts of this machine!

• Wind: Every trick of this machine needed to be wind-proof, which made the tricks less exciting. I would run out from my hiding spot to stop the machine when gusts of wind set it off early.

• Rain: Some of my materials could get damaged in water, so I needed to remove them from the machine and put them inside when it rained. 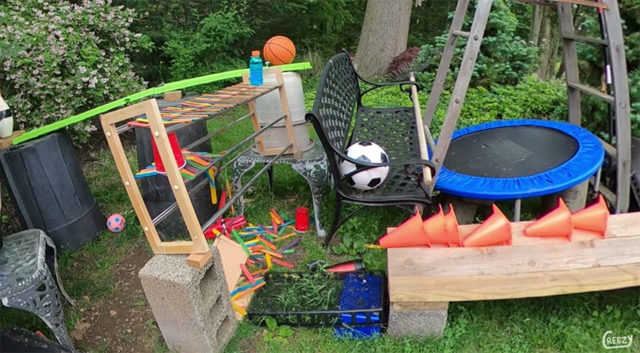 • Consistency: I needed the machine to work all the way through when a squirrel finally set it off. I decided to build a smaller machine, and tested it out a TON to make sure it worked (almost) every time.

• Just generally waiting 14 hours: I tried the machine a couple hours each day. My cameras would overheat, I would get hungry, and bored. Super pumped to finish up the video before the summer heat though! 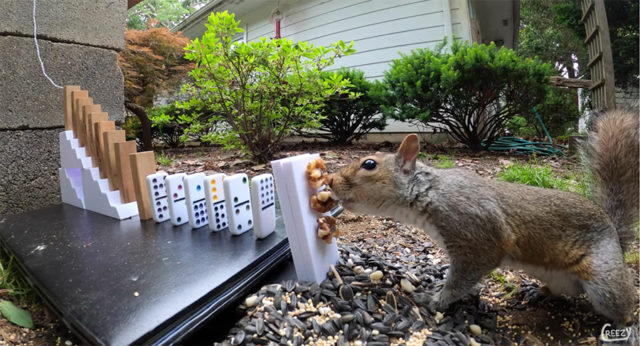 The Little Bird and the Squirrel, an autumn tale