Playing her electric guitar under the eaves of an abandoned train station in rainy Manchester, England, Sister Rosetta Tharpe performed Didn’t It Rain.

An American singer, songwriter, and The Godmother of Rock & Roll, Tharpe’s performance was one of many on a 1964 Blues and Gospel Train tour through Europe that also included the great Muddy Waters. Her slightly impromptu performance was a standout for many who watched on 7 May, 1964. From the BBC.com, a memory from TV producer Johnnie Hamp:

The station was dressed up to look like one from the American South, but typically for Manchester, the weather did not echo that area’s dustbowl conditions. Shortly after the train which carried the audience the few miles south from Manchester’s city centre pulled in, a storm lashed the station.

Mr. Hamp says the downpour would have been his worst memory of the show had it not led to his best. “Sister Rosetta came to me and asked if she could change her opening number to Didn’t It Rain?,” he said. “When she strapped on her guitar, it was astounding.” 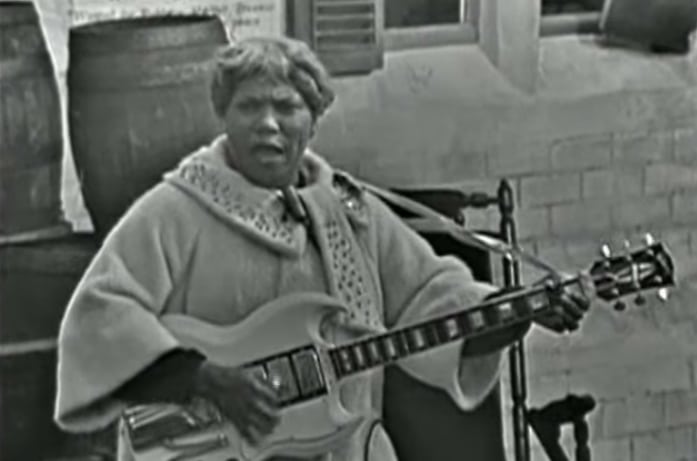 You can find her performance on the American Folk-Blues Festival: The British Tours 1963-1966 DVD or as an MP3 single. Her musical performances influenced Bob Dylan, Little Richard, Elvis Presley, Johnny Cash, and many other musicians.

Related watching: Etta James: Something’s Got a Hold On Me.

What A Wonderful World: Jon Batiste live at the 50th Montreux Jazz Festival