Why do dippers dip?

Dippers are aquatic songbirds that walk and seem to almost “fly” underwater as they hunt for caddisfly, mayfly, stonefly, midge, and mosquito larvae, as well as tiny shrimp, fish, and fish eggs along the riverbed. They get their name from one of their hunting strategies: rapidly dipping their heads below the surface of the water.


In 2020, photographer Kyle Dudgeon filmed an American dipper (Cinclus mexicanus) along “a hotspot” for the species, a warmed-water rapids section of the Gardiner River in Yellowstone National Park‘s northwest corner.

The 4K slow-motion footage provides a breathtaking up-close look at how the dipper forages for its food, all set to the sound of rushing water.


Why do dippers dip? From the Audubon and BirdNote Daily:

“Let’s consider three theories: One suggests the dipper’s repetitive bobbing against a background of turbulent water helps conceal the bird’s image from predators. A second asserts that dipping helps it sight prey beneath the surface of the water. A third theory holds the most promise. Dipping – as well as the rhythmic flicking of those flashy white eyelids – may be a mode of visual communication among American dippers in their very noisy environment. That dippers make exaggerated dipping movements during courtship and also to threaten aggressors lends support to this theory.”

And what happens when the dipper dives? UK-based wildlife filmmaker Jack Perks shares underwater footage of a white-throated dipper (Cinclus cinclus) below: 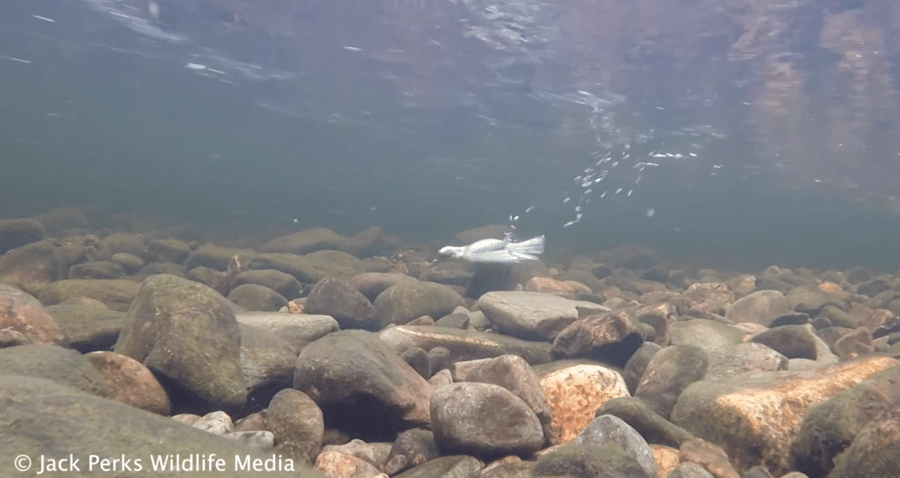 Find more wildlife photos from Dudgeon and Perks at @kdudgeonphoto and @fishtwitcher on Instagram.

PODCAST ALERT: BirdNote Daily: Amazing Aquatic American Dipper. “Suddenly it dives — and holds its place under water with its short, strong wings — against a coursing flow that would knock a person right over.”

Watch these hand-picked videos next:
• The Kingfisher hunts for fish on the River Shannon
• Gannets Diving for Fish
• Emperor Penguins Speed Launch Out of the Water
• An osprey fishing in spectacular super slow motion

Plus: The six-spotted fishing spider hunts and eats fish.

Penguins can’t fly, but they can jump

Mesmerizing sandpipers hunt… while being hunted

Emperor Penguins Speed Launch Out of the Water