How do you make a DIY LEGO tensegrity sculpture?

A series of small, specific LEGO pieces are popped together one by one, creating two rounded stands. One has a base. Three flexible LEGO chains are added to connect them. And then, as if it can defy gravity, one is held up over the other and seems to actually defy gravity. But what’s really going on here?

This mind-blowing LEGO tensegrity sculpture is by Jason Allemann of JK Brickworks. An explanation:

This is built using a structural principle called tensional integrity (tensegrity for short), where all the chains are under tension due to the distribution of mass in the system.

There are many ways one of these can be built. With a three chain setup like this one, the key is that for the upper part there must be more mass on the side facing away from the two long chains.

In this model, that is just barely the case, so it will collapse pretty easily if it is disturbed. It can be made more stable by adding more bricks to the ‘long’ side. For example, in the video it becomes more stable once Emmet is seated on top.

You can remake this specific LEGO tensegrity structure with Allemann’s part list and guide, or create your own design. More on tensegrity from Wikipedia:

Tensegrity, tensional integrity or floating compression is a structural principle based on a system of isolated components under compression inside a network of continuous tension, and arranged in such a way that the compressed members (usually bars or struts) do not touch each other while the prestressed tensioned members (usually cables or tendons) delineate the system spatially.

The term was coined by Buckminster Fuller in the 1960s as a portmanteau of “tensional integrity”. The other denomination of tensegrity, floating compression, was used mainly by the constructivist artist Kenneth Snelson. 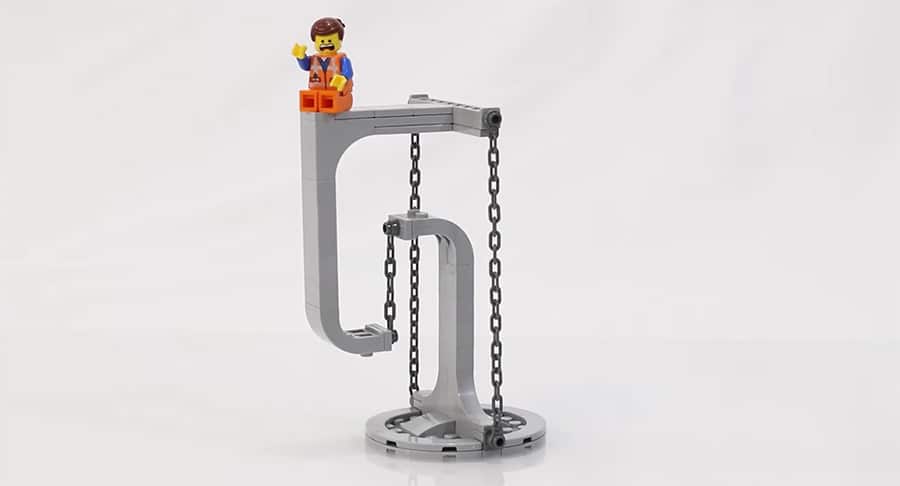 You might already know of this popular example of tensegrity: This “skwishy” baby toy.

Then watch this: Exploring Space with Shape-Shifting Robots.

Plus, there are lots of LEGO videos on TKSST, including these three DIY activities that might inspire your own projects:
• JK Brickworks’ LEGO Drawing Machine
• Three LEGO soap bubble machine ideas
• The Egg Wizard, a DIY LEGO and cardboard egg-decorating machine

The Egg Wizard, a DIY LEGO and cardboard egg-decorating machine