Exploring the surface of a comet or asteroid with Hedgehog

When you’re exploring a comet or asteroid, you’ve got to contend with a microgravity environment and some seriously rugged terrain, two huge challenges for a traditional rover. Enter Hedgehog, a jump, spin, and tumble-capable robot concept designed to be deployed solo or in a group, outfitted with cameras, spectrometers, and more. From NASA Jet Propulsion Lab:

The basic concept is a cube with spikes that moves by spinning and braking internal flywheels. The spikes protect the robot’s body from the terrain and act as feet while hopping and tumbling.

Two Hedgehog prototypes — one from Stanford and one from JPL — were tested aboard NASA’s C-9 aircraft for microgravity research in June 2015. During 180 parabolas, over the course of four flights, these robots demonstrated several types of maneuvers that would be useful for getting around on small bodies with reduced gravity. Researchers tested these maneuvers on different materials that mimic a wide range of surfaces: sandy, rough and rocky, slippery and icy, and soft and crumbly…

The researchers are currently working on Hedgehog’s autonomy, trying to increase how much the robots can do by themselves without instructions from Earth. Their idea is that an orbiting mothership would relay signals to and from the robot, similar to how NASA’s Mars rovers Curiosity and Opportunity communicate via satellites orbiting Mars. The mothership would also help the robots navigate and determine their positions. 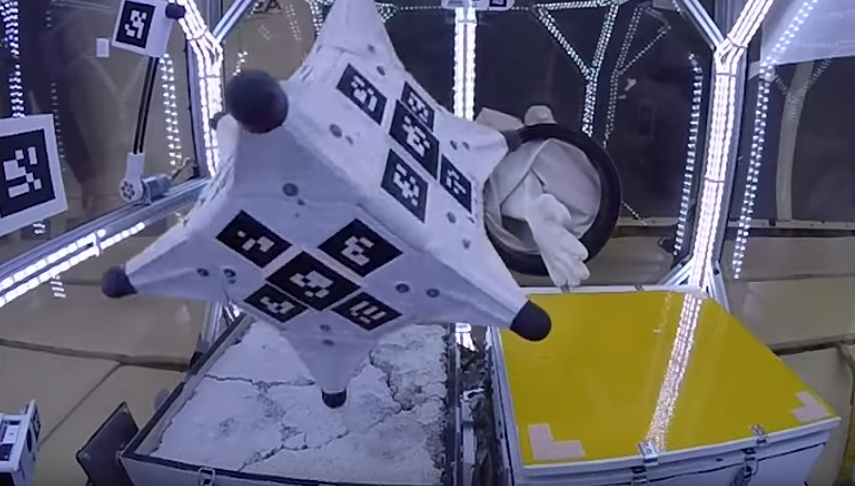 Upside Down & Inside Out – OK Go in zero-g