The “secret world” below the Antarctic ice sheet

Watch as divers explore “a secret world” below the Antarctic ice sheet, entering the dark waters via a small hole within a shed that helps protect them from the elements. This crew from the BBC’s Seven Worlds, One Planet series is equipped with cameras that will help them document their journey and the creatures that they find: Sea spiders, starfish, sea angels, and more. 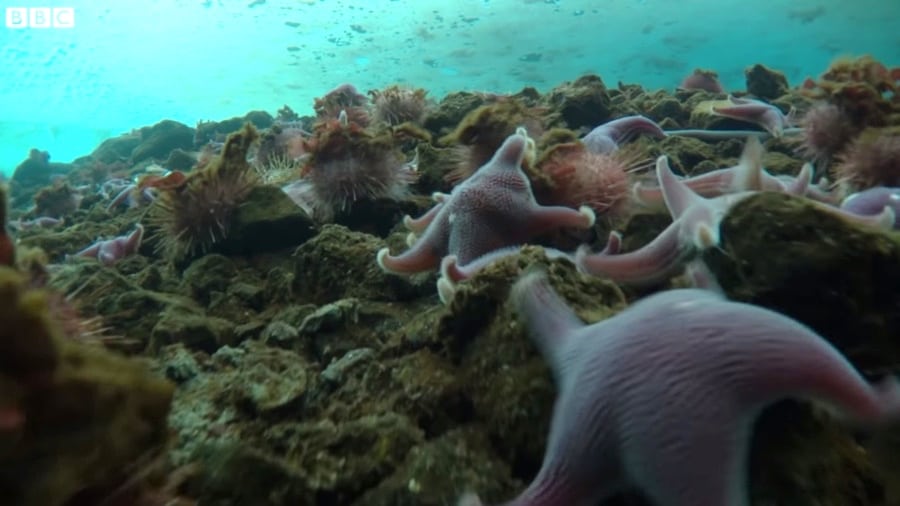 From the episode’s description:

Life has flourished and diversified. Starfish, sea spiders and three million predatory worms carpet the ocean floor, and sea anemones feast on ocean giants. Islands on the fringes of the continent are free of sea ice, far more hospitable and crowded. Huge colonies of king penguins cover the land, and four-tonne elephant seals fight for territories on the beach.

The abundance of life found here is down to the incredibly rich ocean surrounding the continent. The strongest currents in the world whip up nutrients to the surface that feed Antarctic krill. Numbering an estimated 400 trillion, their combined weight is greater than any other species in the world. Humpback whales round them up using sophisticated feeding techniques, and gentoo penguins escape the jaws of leopard seals and orcas to reach the open ocean and feed on them. On rare occasions krill swarm in baitballs measuring kilometres across, where they are feasted on by thousands of penguins, seals, albatross and fin whales.

How will these creatures be affected by climate change? And how will warming within the planet’s Southern Ocean affect us? Seven Worlds, One Planet is narrated by Sir David Attenborough.

Get another look from this footage from the Australian Antarctic Division, via The Wall Street Journal:

Next, go 1000m beneath the Antarctic ice, where no human has gone before and see Science and survival on Continent 7: Antarctica.

Bonus: What does it look like underneath a lake covered with Antarctic ice?

Two months in 5 minutes: Breaking ice on an icebreaker boat

The Seventh Continent: Flying a helicopter over Antarctica

The Arctic vs. the Antarctic