On April 19, 2021, NASA’s Mars helicopter Ingenuity took its first powered and controlled flight within Jezero Crater on Mars, rising approximately 3 meters (10 feet) off the ground. It is the first aircraft to ever fly on another planet.

Ingenuity’s initial flight demonstration was autonomous – piloted by onboard guidance, navigation, and control systems running algorithms developed by the team at JPL. Because data must be sent to and returned from the Red Planet over hundreds of millions of miles using orbiting satellites and NASA’s Deep Space Network, Ingenuity cannot be flown with a joystick, and its flight was not observable from Earth in real time…

This first flight was full of unknowns. The Red Planet has a significantly lower gravity – one-third that of Earth’s – and an extremely thin atmosphere with only 1% the pressure at the surface compared to our planet. This means there are relatively few air molecules with which Ingenuity’s two 4-foot-wide (1.2-meter-wide) rotor blades can interact to achieve flight.

The helicopter also took this black and white image of its shadow while it hovered: 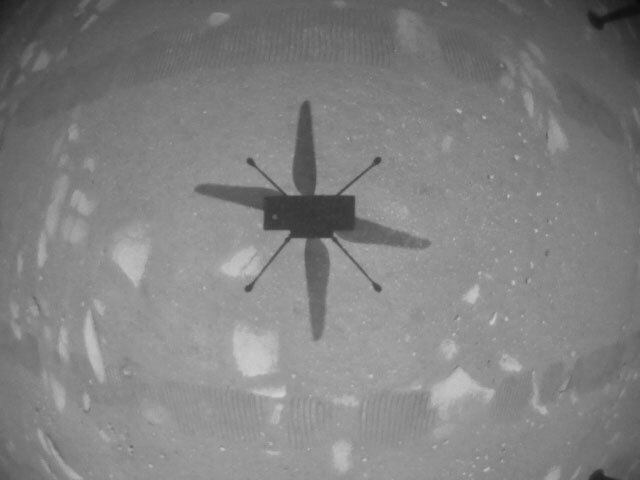 Bonus: What did Mars look like 4 billion years ago?