Snowy owl chicks learn to fly across the tundra

Alaskan snowy owls have about three weeks before their hatchlings, a brood of fluffy gray owl chicks, leave their nest to hide in the tundra grasses nearby. They still can’t feed themselves or fly, so the parents continue to bring them thirty lemmings a day.

“The chicks will need to triple their weight before they reach independence,” Sir David Attenborough explains in this clip from the BBC’s Frozen Planet II. 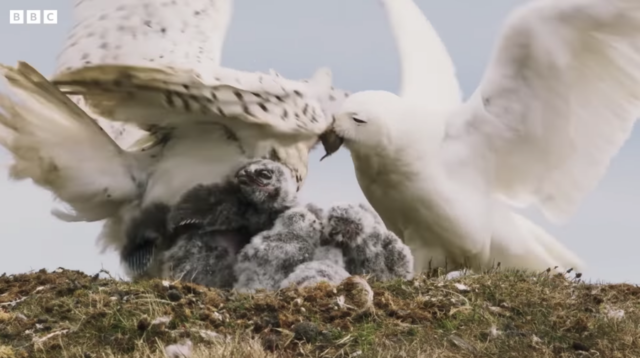 And they have around five more weeks of hiding, eating, hopping, and flapping before the owl chicks will be ready to live on their own. From the Owl Research Institute:

“Nest departure sounds dangerous for young owls, but it might actually keep them safer than staying in the nest. The theory is that if a bear, Arctic Fox, or other predator raids the nest, it will easily eat the entire clutch of chicks. Once dispersed on the tundra, however, the chicks are well camouflaged and can spread out to hide from predators. Though they are certainly vulnerable to predators at this time, the chances of more chicks surviving an attack becomes greater…” 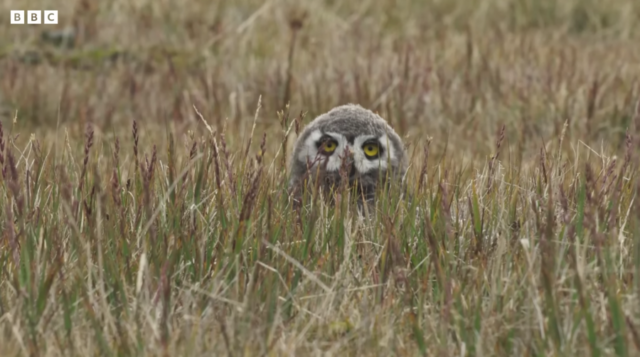 “Before Snowy Owl fledglings make their first flight, they spend several days hopping around and flapping their wings before ‘lift-off’ occurs. Each day of practice finds them staying airborne more and more, starting with just a few feet at a time, and gradually working up to longer distances. Although flying is innate, or instinctive, in birds, they still have to practice, just like humans when beginning to walk.” 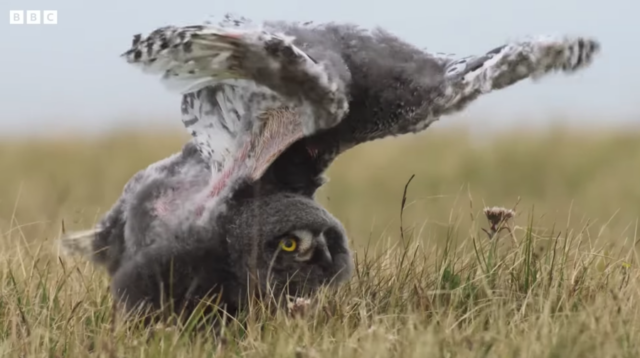 Watch these owl videos next on TKSST:
• Secrets Of The Snowy Owl
• Snowy Owl Invasion
• The Burrowing Owl’s Cozy Underground Home
• The Orphan Owl
• Scenes from inside a Barred Owl nest

What happens after a barn owl swallows a rodent whole?

Secrets Of The Snowy Owl