Randomizing pendulums, a wooden hammer chime, a bounce and catch, and two hammer bells: This limited edition Summer Fantasy Ball Machine Sculpture was designed by artist George Rhoads and fabricated by the team at Creative Machines. From The New York Times:

Mr. Rhoads’s colorful “audio-kinetic ball machines,” which evoked the workings of watches and roller coasters, were built of comically designed tracks and devices like loop-the-loops and helical ramps, and were usually six- to 10-feet high. Scores of the machines have been installed in children’s hospitals, malls, science museums and airports and elsewhere in a dozen countries, but mostly in the United States and Japan. 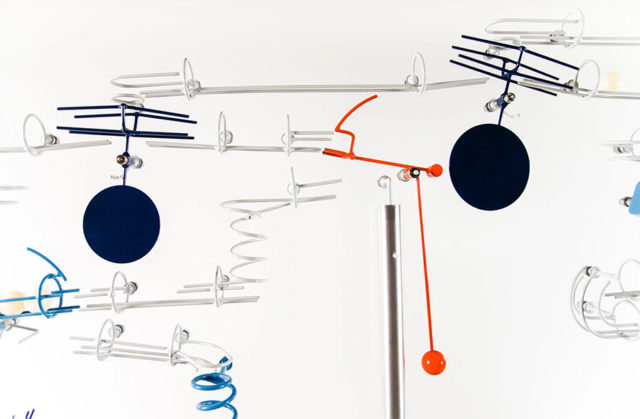 Enjoy a few close-ups in this Winter Fantasy edition video from Creative Machines: 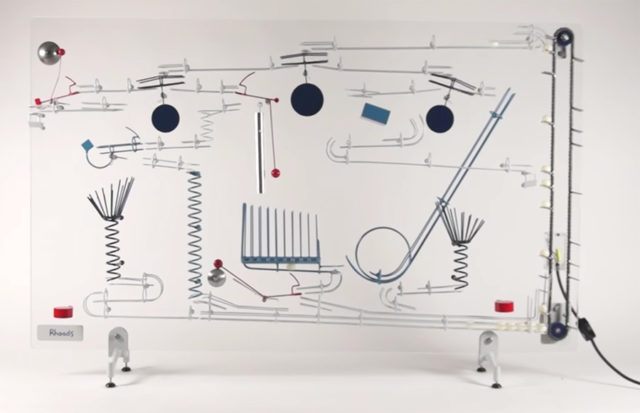 Mr. Rhoads believed the appeal of his creations was their openness — as if each viewer were wearing a loupe and were examining the insides of a 1900s Waltham pocket watch.

“Machines are interesting to everybody but people usually don’t understand them because, as in a gasoline engine, the fun part goes on inside the cylinder,” he said. “So I’ve restricted myself to mechanisms you can see and understand quickly.

Here’s another video of the sculpture. It’s set against dark moving blanket so that the balls are more visible: