The Goat That Ate Time (2007), an animated tale by Lucinda Schreiber

“High on a hill and somewhat far away, there once lived a goat and he was very hungry. He ate goat things and not so goat things. His mother, as mothers are prone to do, was always correcting his eating habits.

“‘Henri,’ she said, for that was his name. ‘Henry, you mustn’t eat so much. Slow down. Don’t chew so fast. Look up when you are eating, Henry. There are so many things to life you know other than food why don’t you run and play and gambol like your brothers.’ 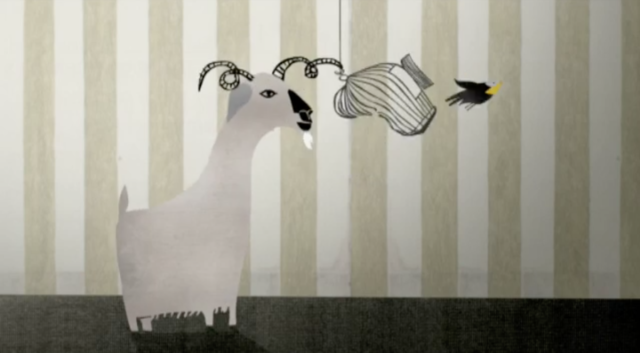 “‘What a boring and impossible waste of time’ thought Henry, ‘when there are so many delicious things in the world to snack on.’ Henry was well aware of time, you see, and frankly, that there was never enough of it in his mind to eat all the things he planned and hoped and dreamed of eating.” 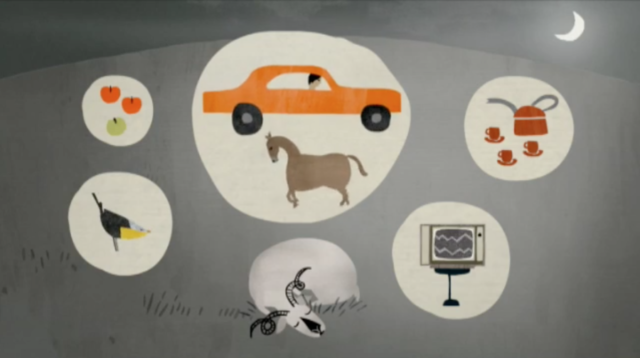 “And with that he began eating even earlier, before the earliest early bird and well past any midnight snack. But there still wasn’t enough time for Henry.”

What will a voracious goat eat in the world? Will he eat watches, grandfather clocks, the Royal Observatory in Greenwich, and time itself? Can this goat, with his insatiable appetite for life, experience time passing by consuming it?

The Goat That Ate Time is an award-winning fable from 2007. It was written, directed, animated, and produced by New York-based Australian Lucinda Schreiber. 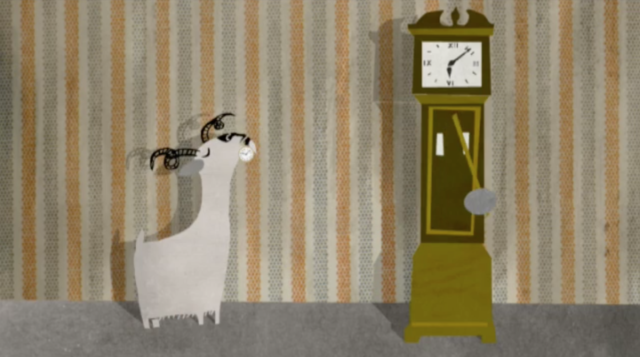 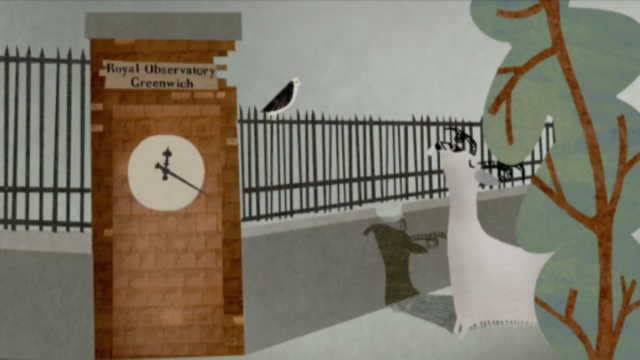 What slows down time? What speeds it up? How might we change our perception of time as it passes? From Fast Company‘s How To Trick Your Brain To Slow Down Time:

“Simply put, time slows down when you attend to more things. In one study, researchers found that when our attention shifts onto something novel, time appears to tick by more slowly. Think of the last time you walked somewhere you’d never been. Everything was new, and you probably spent a lot more time focusing on and thinking about all your new surroundings. Then on the way back, it seemed to go so much faster…

“We can notice more of what’s happening at any moment by simply being more mindful. Mindfulness meditation, which is geared to helping people more fully attend to aspects of the present moment, has been shown to slow down perceived time.

“On the flip side, if you’re lost in just one task, time just whizzes by… So if you want to experience more time in the time you actually have, expose yourself to novel things and be more mindful of what’s going on.” 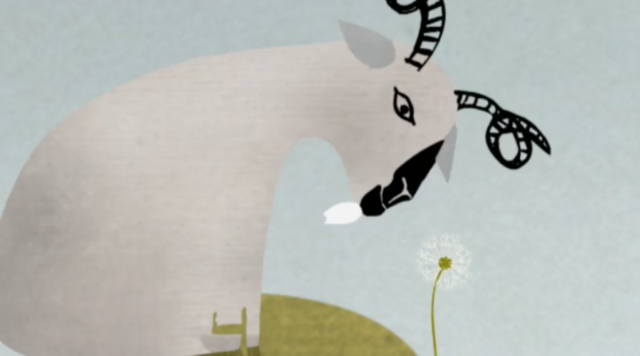 Find a higher resolution version of The Goat That Ate Time on Vimeo and find Lucinda Schreiber on Instagram.

Watch these related videos next on TKSST:
• The North Wind and the Sun: A Fable by Aesop
• The Lion and the Mouse (1976) – Evelyn Lambart
• Father and Daughter by Michaël Dudok De Wit
• Al Jarnow’s Cosmic Clock (1979)

Bonus: “Meditation is all about practice,” two animal-themed animations for all ages.

Why do goats have rectangular pupils?

The Story of Nitrogen

The Running of the Goats at Sunflower Farm Creamery