How are empanadas made?

The word ‘empanada‘ comes from the Spanish verb empanar, meaning “to cover in dough or pastry,” and at Nonna’s Empanadas in Los Angeles, founder Eddy Ekmekgian and his team make that happen 15,000 to 20,000 times every week. In this promotional feature by Tasty, we see How Empanadas Are Made, from how the fillings are cooked to the different ways dough can be sealed.

Some history from The Spruce Eats:

The empanadas we enjoy today are thought to have originated in Galicia, Spain. The idea of wrapping a hardy filling in pastry dough may well have stemmed from the Moors who occupied Spain for hundreds of years. A cookbook published in Catalan, Spain in 1520 includes empanadas made with seafood.

The first empanadas in Western Hemisphere are credited to Argentina. The U.S. has even given the empanada a dedicated holiday — National Empanada Day, celebrated on April 8. Empanadas are a traditional Christmas treat in New Mexico. They’re commonly referred to as creoles in the southwest and the south, and as fried pies in the southeast.

Cubans fill their empanadas with seasoned ground beef or chicken before frying them. They’re prepared and eaten the same way in the Dominican Republic and Puerto Rico. 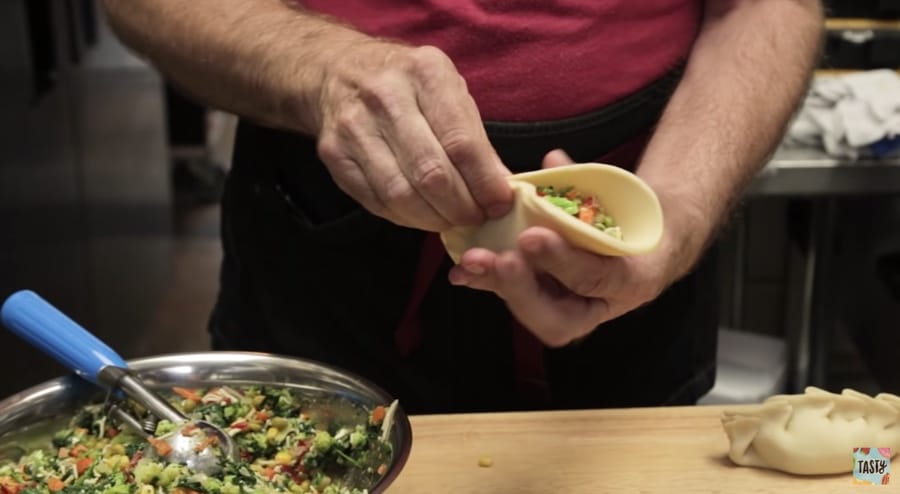 Make some empanadas! Try these recipes at The New York Times, The Spruce Eats, or these sweet and savory recipes at Parents. Or fill them with your favorite ingredients to make your own signature dish.

Next: Making Baklava at İmam Çağdaş, four pro-chef pastry recipes that are super easy to make, and how to make an apple galette.

What Does the World Eat for Breakfast?

The Art Of Making Noodles By Hand: Peter Song and Shuichi Kotani

The Amazing Art of Bread Baking in Tajikistan

Pounding Mochi with the Fastest Mochi Maker in Japan