How Were the Pyramids Built?

Collectively known as the Giza Necropolis, The Great Pyramid of Giza, the Pyramid of Khafre, and the Pyramid of Menkaure are world wonders that rest with the Great Sphinx of Giza at the edge of Cairo, Egypt. How were the pyramids’ limestone rocks cut and shaped with copper tools? How did they form and transport the granite that was used? And how did the builders haul the rocks up to the highest parts of these massive structures over the course of 20-30 years?

In this 2014 Veritasium video, Derek Muller discusses how the pyramids were built while visiting the famous Egyptian site. From the video notes:

The most common misconception about the pyramids is that they were built by slaves. Recent archeological evidence suggests they were instead constructed by paid workers. Some may have performed this work as a form of tax payment for several months of the year. Skilled engineers would have planned and orchestrated the building. An estimated 10,000-20,000 people would have been working on a pyramid at any one point in time. They were well fed and provided with shelter near the pyramids. Plus their burial sites close by indicate they were respected and were not slaves.

Much of the limestone was quarried from the Giza plateau itself, meaning the stones did not need to be transported far. The granite casing of Menkaure‘s pyramid, on the other hand, was transported from Aswan, around 600 miles, or 1000 km up the Nile. 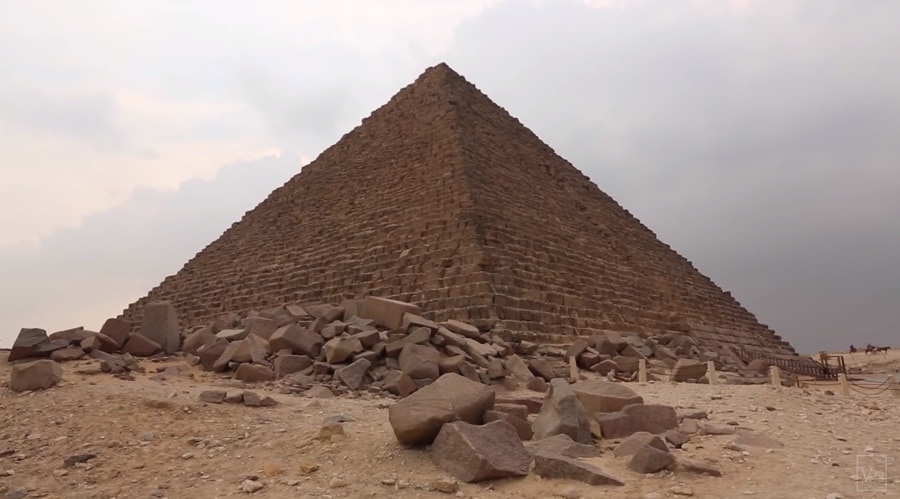 Related exploration of these 5,000 year old monuments: The Pyramids of Giza on Google Streetview.

Then watch these videos: The Great Pyramid of Giza was bright white & highly polished and flying a drone over Sudan’s 3,000 year old Nubian Pyramids.

The Art of Gem Carving