German juggler Francis Brunn moves with the grace and precision of Rudolf Nureyev or Gene Kelly as he performs almost impossible looking balancing and juggling tricks. This 1969 performance was for a ZDF German television variety show and features some astonishing work, including his signature ‘Impossible Trick’ at 4m50s. 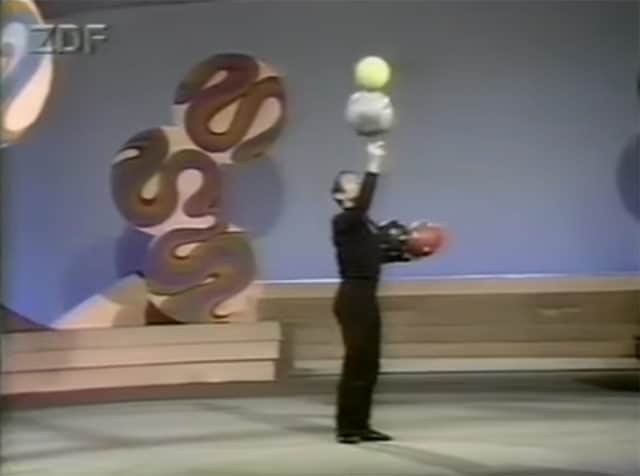 But don’t skip ahead. The sequences are astonishing.

Brunn enjoyed career highlight performances at the White House and as a regular guest on The Ed Sullivan Show. Some background from The New York Times:

At the beginning of his career, Mr. Brunn, a former gymnast, was celebrated for lightning speed in juggling a dozen objects simultaneously. But later, he perfected an austere but demanding minimalism. He was fascinated by controlling just one ball, and virtually compelled audiences to share this fascination.

”It sounds like nothing,” he said, ”but it is quite difficult to do properly…”

”I do not consider myself doing tricks,” he said in an interview with The New York Times in 1983. ”There is one movement for eight minutes. It’s supposed to be, let’s say, like a ballet. It would be impossible for me to start in the middle. I would love if the audience is so fascinated that nobody applauds in the end.”

The tricks featured above may not feel minimal and they may cause lots of audible delight from all ages. I mean…

Taylor Tries Juggling From Above

How to juggle 3 balls, a beginner tutorial by Taylor Tries