Not all dinosaurs went extinct during the Cretaceous–Paleogene (K–Pg) extinction event around 66 million years ago. In this video from the American Museum of Natural History‘s Space Vs Dinos series, paleontologist Aki Watanabe explains that some dinosaurs escaped extinction. These relatives of Tyrannosaurus and Velociraptor can be found thriving all over the planet: We call them birds. From AMNH:

In the view of most paleontologists today, birds are living dinosaurs. In other words, the traits that we accept as defining birds — key skeletal features as well as behaviors including nesting and brooding — actually arose first in some dinosaurs. Most intriguing, and debated, is the evidence of feathers and featherlike structures on these dinosaurs…

The best explanation for the presence of these shared characteristics is that they existed in a common ancestor, from which both dinosaurs and birds are descended. As more fossils help fill in gaps in the bird-dinosaur family tree, scientists are reassessing their understanding of the origin of birds and acknowledging that the boundary is blurred between modern birds and their dinosaur ancestors.

Plus, from The Cornell Lab’s AllAboutBirds.org:

Fossil evidence recently unearthed in China and Canada has confirmed that bird ancestors did indeed possess feathers from each of the steps in this proposed evolutionary pathway. Surprisingly, many theropod dinosaurs had simple stage 1 feathers covering their bodies. This “dino fuzz” even covered close relatives of the great Tyrannosaurus rex. These early feathers may have been insulating, or when colorful, may have helped dinosaurs show off or stay camouflaged. There is also intriguing evidence of more complex Stage 3 and 4 feathers from finds like Ornithomimus edmontonicus. As adults, these large, bulky creatures sported feathers arranged along wing-like structures, but no wing feather traces have been found among the juvenile specimens. This suggests that even as dinosaurs started to evolve wings, the wing feathers were likely used for courtship or territorial display, not flight. 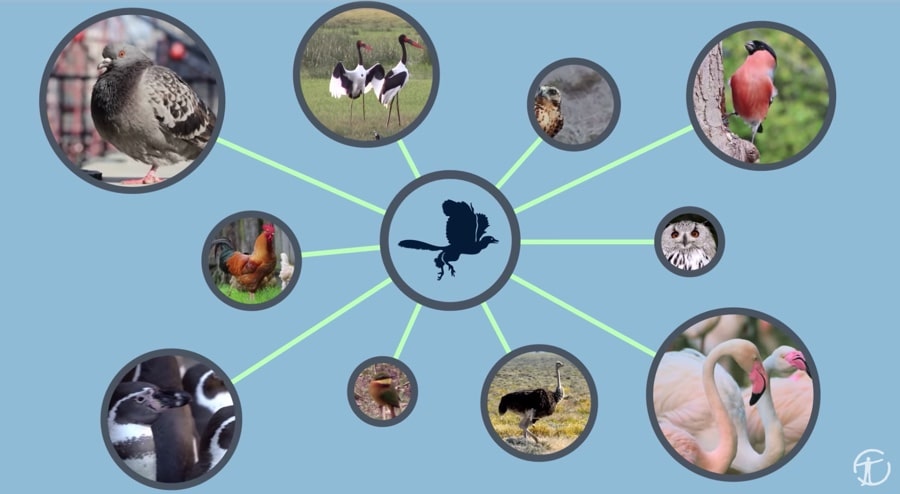 Read more about the 150-million-year evolution of birds in National Geographic: These Are the Dinosaurs That Didn’t Die and more about Archaeopteryx. Plus: Do dinosaurs still live among us?

Related videos: Dinosaurs Among Us, Dinosaur’s Feathered Tail Found Remarkably Preserved in Amber, and TED-Ed’s How Did Feathers Evolve?

Bonus: Watanabe jackets a nest of dinosaur eggs in the Gobi Desert.