Meteor Over Chelyabinsk, Russia Caught on a Dash Cam

…a very big meteor burned up over Chelyabinsk, a city in Russia just east of the Ural mountains, and about 1500 kilometers east of Moscow. The fireball was incredibly bright, rivaling the Sun! There was a pretty big sonic boom from the fireball, which set off car alarms and shattered windows.

Slate’s Bad Astronomy blog continues to update with videos and photos as more information is revealed (and corrected). In the clear video above, you can see the meteor as it was recorded on February 15, 2013 by a dashboard camera. More from NASA:

Meteoroids are objects in space that range in size from dust grains to small asteroids. Think of them as “space rocks.”

When meteoroids enter Earth’s atmosphere (or that of another planet, like Mars) at high speed and burn up, the fireballs or “shooting stars” are called meteors.

When a meteoroid survives a trip through the atmosphere and hits the ground, it’s called a meteorite. 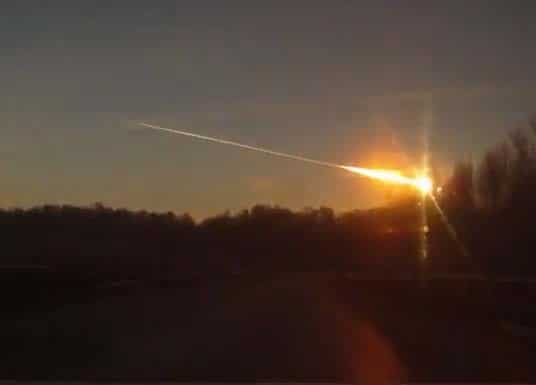 Update: In this case, the Chelyabinsk meteor did yield meteorites:

Scientists collected 53 samples nearby a 6-metre-wide hole in the ice of Lake Chebarkul, thought to be the result of a single meteorite fragment impact. The specimens are of various sizes, with the largest being 5 kg (11 lb), and initial laboratory analysis confirmed their meteoric origin.

From the archives: What is a meteor? And how do we study them?

The dazzling fluorescent colors of corals under actinic lights