“They are beetles that can fly. They produce flashes of light through a process called bioluminescence. Their light is hundred percent efficient. Fireflies glow in the dark to communicate, especially to find a mate. There are over 2,000 species of fireflies but only a few like these found in the Anamalai Tiger Reserve are synchronous.”

Murali, an International Dark-Sky Association volunteer, has documented this stunning phenomenon with time-lapse photography and video in the short film above titled Minmini (மின்மினி), meaning Fireflies in Tamil. Watching the video above in a darkened room will enhance viewing. Murali continues:

“Such large congregations of the synchronous fireflies are very rare. These insects are an indicator of the pristine environment at the Anamalai Tiger Reserve thanks to decades of conservation work. Fireflies are a fascination for people of all ages. Their population is on the decline across the world. It is critical to preserve these magical tiny creatures for our future generations.” 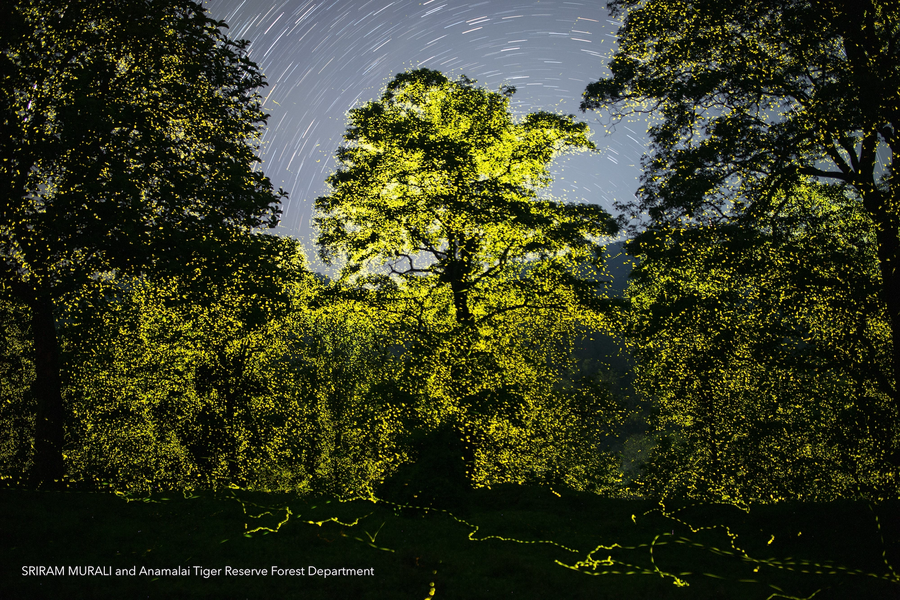 Over the last decade, Murali has made images and documentaries to raise awareness about light pollution and its effects on the ecology of the reserve. This effort, in collaboration with Anamalai Deputy Director M.G. Ganesan, may also help identify a new species of synchronous fireflies, an addition to the seven or eight species already recorded in India. From The New Indian Express:

“Several lakhs of fireflies were seen coordinating their flashes across the forest. The illumination was found emerging in one tree and the relay was carried across the forest and the cycle continued all night,” said ATR Deputy Director MG Ganesan adding that some trees pulsated in flashes that showed the trees’ structure in pitch black. Each tree seemed to have a different flashing pattern. The entire forest was glowing in yellowish-green, he exclaimed.

Synchronous fireflies can be found around the globe, including the tiny Mexican town of Nanacamilpa.

Watch these firefly and light pollution videos next:
• In A Flash: Firefly Communication
• Beautiful summer nights full of fireflies and stars
• Firefly Experience: Lightning bugs light the Iowa woods
• Fireflies sparkle in a Pennsylvania field at dusk
• Star Parties In Our National Parks: Parks After Dark
• What happened to the Milky Way?

Why are moths obsessed with lamps?

The synchronous fireflies of Nanacamilpa

On Light Pollution: The End of Darkness

In A Flash: Firefly Communication

How to Observe a Meteor Shower