Ulaanbaatar, Mongolia-based musician and Mongolian throat singer Batzorig Vaanchig sings a traditional song, Xotgoidiin Unaga, with his daughter Marla. He’s performing a type of throat singing called Khöömei or Khuumii, and is playing what looks to be an instrument called a Tovshuur. More from the Smithsonian Institution’s Folkways Magazine:

Throat-singing, a guttural style of singing or chanting, is one of the world’s oldest forms of music. For those who think the human voice can produce only one note at a time, the resonant harmonies of throat-singing are surprising. In throat-singing, a singer can produce two or more notes simultaneously through specialized vocalization technique taking advantage of the throat’s resonance characteristics. By precise movements of the lips, tongue, jaw, velum, and larynx, throat-singers produce unique harmonies using only their bodies.

According to writer Tom O’Malley, the pulsing within the two-tone technique is called ezenggileer and mimics the rhythms of horseback riding, a traditional theme in within Tuvan culture. It also emphasizes the song, which is about “strong and fast horses.” 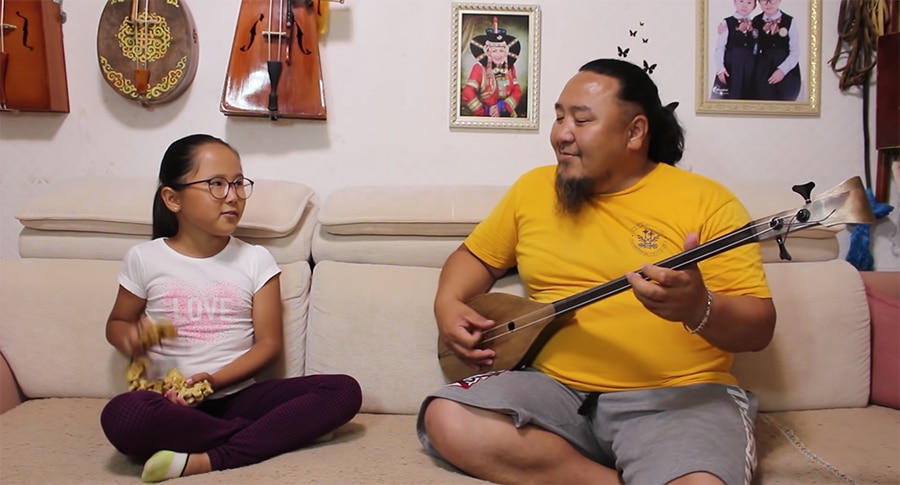 In the video below, he sings to his son. The caption for the video quips, “That face you make when you first hear to Batzorig singing Khuumii (kharkhiraa style).”

Then watch Dicken Schrader and his kids sing Depeche Mode’s Everything Counts and Dinosaurs In Love by Fenn Rosenthal (featuring Tom Rosenthal).

The Lick, a seven-note musical phrase played on 91 instruments

That Cello Guy: The multi-screen performances of Cremaine Booker

Super Mario Bros. on a marimba with four mallets