Can Namib Desert beetles help us solve our drought problems?

Can we pull enough water out of the air to sustain drought-stricken places around the planet? It might help to Think Like A Tree… or a Namib Desert Beetle called the Stenocara gracilipes, who harvests water from the early morning fog in southern Africa’s arid Namib Desert:

To drink water, the S. gracilipes stands on a small ridge of sand using its long, spindly legs. Facing into the breeze, with its body angled at 45°, the beetle catches fog droplets on its hardened wings. Its head faces upwind, and its stiff, bumpy outer wings are spread against the damp breeze.

Minute water droplets (15-20 µm in diameter) from the fog gather on its wings; there the droplets stick to hydrophilic (water-loving) bumps, which are surrounded by waxy, hydrophobic troughs. Droplets flatten as they make contact with the hydrophilic surfaces, preventing them from being blown by wind and providing a surface for other droplets to attach.

Accumulation continues until the combined droplet weight overcomes the water’s electrostatic attraction to the bumps as well as any opposing force of the wind; in a 30 km/h breeze, such a droplet would stick to the wing until it grows to roughly 5 mm in diameter; at that point it will roll down the beetle’s back to its mouthparts. 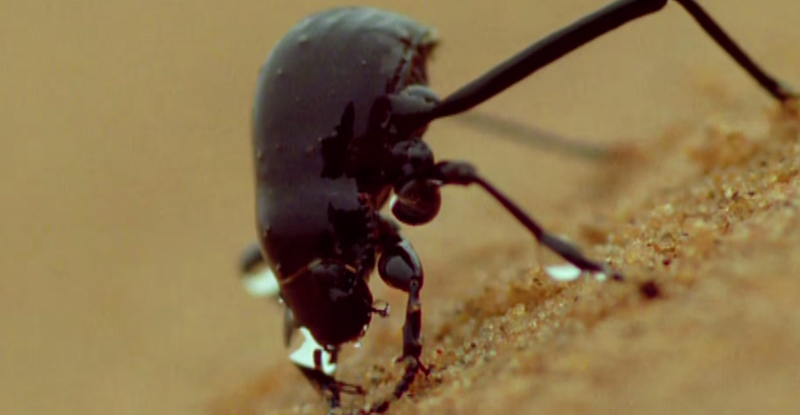 Biomimicry — imitating nature’s best ideas in our design of materials, structures, and systems — has inspired us to invent and improve upon fog-catching nets, self-filling water bottles, water collection irrigation systems, and other solutions.

Read more about the Namib Desert Beetles at Wired.

Watch more from Think Like a Tree on this site, as well as this: Hydrophobic metal made with laser-etched microscopic patterns.

Why would humans want to imitate a slippery, fly-digesting plant?

Why does water roll off a duck’s back?

What is the world’s smallest wild dog?