ShareTweet
Watch more with these video collections:
breadcircleEnglandfoodgeometrymathmeasurementspiplaysconesshapessnackUniversity of SheffieldWomen in STEM

“A cream tea,” notes Wikipedia, “is a form of afternoon tea, consisting of tea served with a combination of scones, clotted cream, jam, and sometimes butter.” It’s an English tradition with regional variations.

Jam or cream first? Whipped or clotted cream? How might you achieve The Perfect Cream Tea with the help of math? Dr Eugenia Cheng weighs in on this long held debate in this 2013 video from The University of Sheffield:

“The research and resulting formula was based on a suggested ratio of 2:1:1 (by weight). For example the average scone weighing 70g would require 35g of jam and 35g of cream. 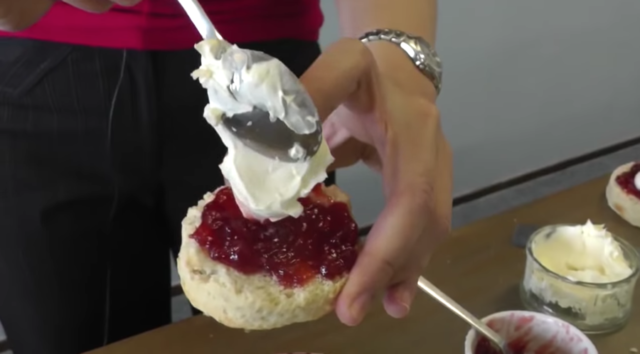 “With this in mind Dr Cheng’s research concluded:

• Clotted cream is better than whipped cream, primarily due to the excessive volume size of whipped cream required.

• The total thickness of the scone, with all its elements, should be around 2.8cm*. This provides a relaxed open width of the mouth.

• Jam, due to its density, needs to be spread prior to the application of the clotted cream.

• Putting it on after the cream may cause the jam to run off – creating sticky fingers.

• The thickness of the cream should also not be thicker than the scone, as the scone will become off balance whilst trying to eat it.”

The recommendation resulting from Cheng’s research: “Actually we recommend you pile as much jam and cream as you like onto your scone.” 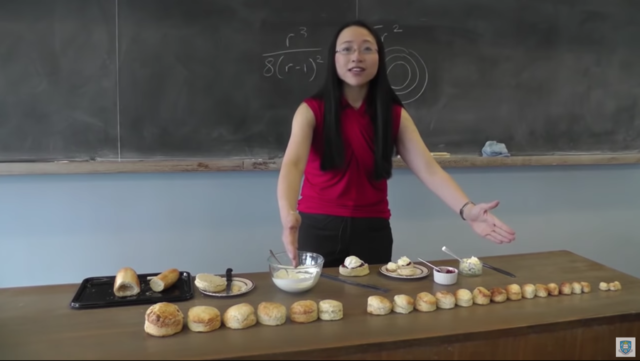 Previously from Cheng: The Sphere-Packing Problem.

Plus, more math videos on TKSST, including:
• The Scientific Way to Cut a Cake
• How to equally share a cake between three people
• Möbius strip bagel, a mathematically correct breakfast by George Hart
• The Remarkable Way We Eat Pizza
• The infinite life of pi
• Calculating Pi (π) with Darts
• Infinite chocolate: How to create chocolate out of nothing

The Scientific Way to Cut a Cake – Numberphile

The infinite life of pi

How to equally share a cake between three people