Native to Brazil, the prayer plant (Maranta leuconeura) is one of around four dozen Maranta species that move in a unique way: By day, its leaves are flat and open, and at night, its leaves raise up, folding like praying hands. This nightly change is called nyctinasty or nyctinastic leaf movement.

There have been many scientific studies about this phenomenon, and lots of time-lapse YouTube videos that capture this movement. This 60 hour timelapse, recorded by Ivan Dub in 2019, reveals just how much the Maranta moves. Does that baby in the photo looks astonished?

From genetic basis of the “sleeping leaves” revealed (2012):

Contrary to intuition, plants are capable of moving in response to environmental stimuli. This movement is achieved either through irreversible differential growth or through reversible changes in turgor. An example of differential growth is the growth toward a light source (phototropism) observed in the majority of plant shoots. Tropisms are plant movements induced by directional stimuli, such as light or gravity. In addition, plants can move in response to nondirectional factors, such as humidity or contact. These movements are called nastic responses. Nyctinasty, the proper name for the “sleep movements of leaves” is a well-known example of a nastic response. In this case, plants close up their leaves and petals in response to the onset of darkness. Because it is a rather fast response, it does not involve differential growth but changes in cellular turgor. 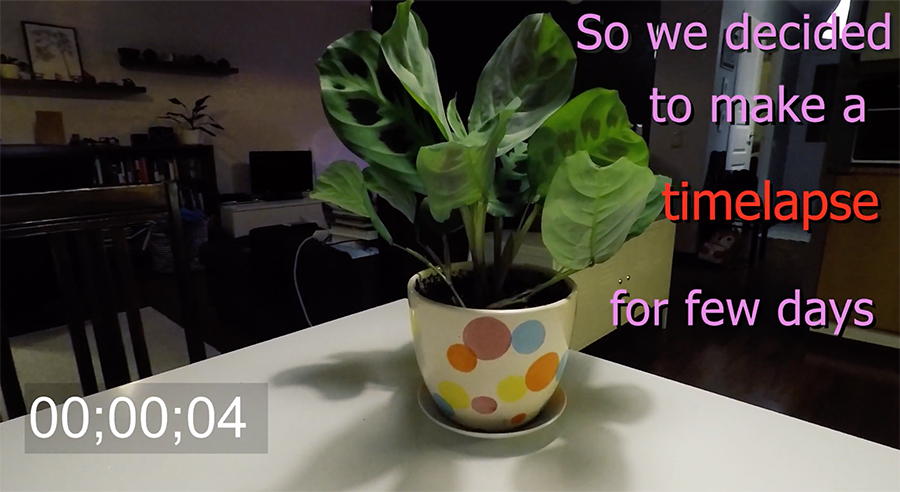