Want to see a quokka eat a leaf?

Slow down for two minutes and spend some time with a contented quokka, a type of small wallaby, while it eats a leaf in the sun. Herbivores, quokkas also eat tree and shrub buds, grasses, succulents, seeds, and yummy roots.

This quokka lives on Rottnest Island, a protected nature reserve off the coast of Western Australia. It was filmed by island visitor Kevin Lew. More from RottnestIsland.com:

“The Quokka is the only mammal which is native to Rottnest Island and can be found almost everywhere on the Island. It is mainly nocturnal. This means that it is mostly active at night, preferring to rest or sleep in the shade during the day.

“The Quokka bounds and hops along the ground although it can climb trees if it needs to. It will sit on its hind legs to look around and will also use its front paws to search for and pick up food.

“The Island habitat supports the largest known Quokka population and is essential for the survival of species… They have become one of the main tourist attractions of Rottnest Island because they have a cute appearance and are easy to see.” 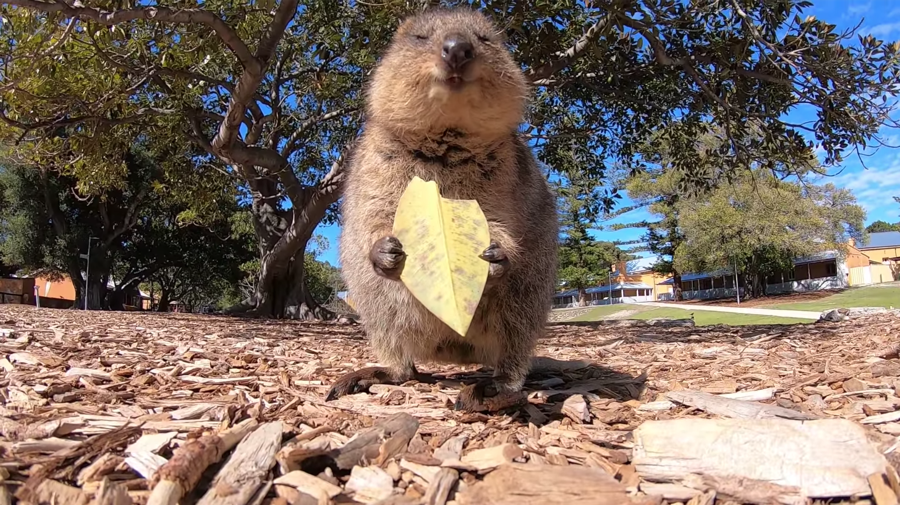 Side note: Rottnest Island was named by Dutch sea captain William de Vlamingh in 1696 when he mistook all of the quokkas for giant rats, but the Whadjuk Noongar people, who were the traditional owners of the island, called it Wadjemup, “which means ‘place across the water where the spirits are.'”

Watch this next: ‘Quokka selfie’ rules that help keep quokkas safe and healthy.

Plus: Marsupials and more calming videos.

Up close with Gem the common wombat

Bilby conservation at the Taronga Zoo

Baby Koala: A Joey moves in its pouch at the Taipei Zoo

A tiny newborn kangaroo climbs into its mother’s pouch

A peek inside marsupial pouches