The Cornell Lab of Ornithology has partnered with the New Zealand Department of Conservation on the department’s 2019-2020 24-hour RoyalCam livestream. RoyalCam documents the development of a Northern Royal Albatross family. They’re located at Pukekura (Taiaroa Head) on New Zealand’s South Island.

In the video above, a NZ Department of Conservation Ranger “visits the RoyalCam nest to candle the egg, which should be nearing hatching in the next couple weeks.” The ranger has reported that the ‘egg is developing as it should.'”

Candling uses a bright light to shine through the egg shell to observe changes in the size of the airspace and embryos within the shell. Candling the eggs allows biologists to assess whether the embryo inside is developing properly as well as estimating how near to hatch the egg is. 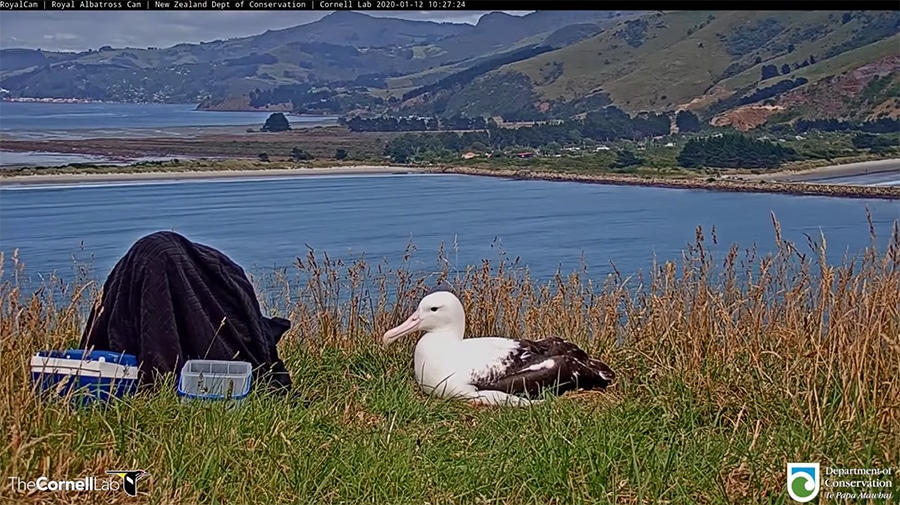 The breeding albatross arrive at Pukekura in September each year. The large white egg, weighing up to 500g, is laid during the first three weeks of November. The parents then share the incubation duty over a period of 11 weeks – one of the longest incubation periods of any bird.

Chicks hatch during late January and early February. The parents take turns at guarding it for the first 30 to 40 days, and also share feeding duties where the chick is fed regularly throughout the day. At 100 days the chick’s down reaches a maximum length of 12cm, important to keep it warm throughout the approaching winter months. 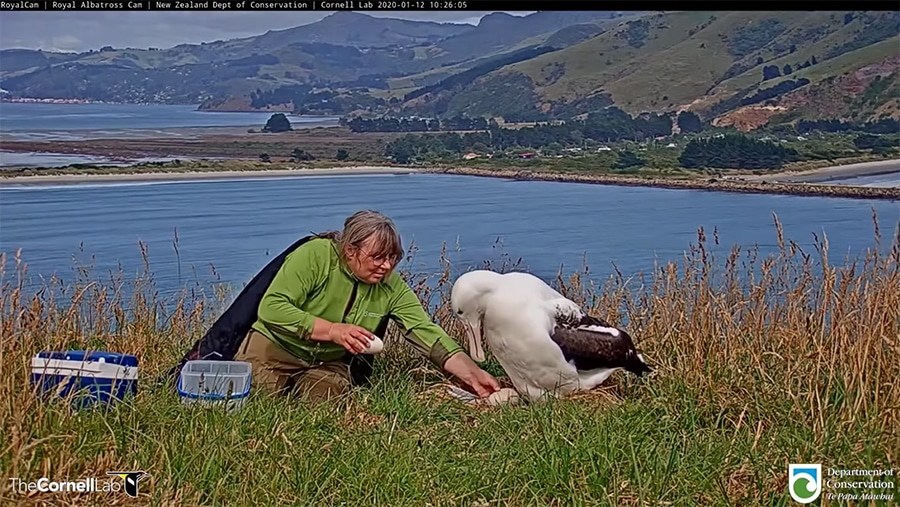 At the start of spring in September, the fully fledged chick wanders from the nest, tests its outstretched wings and eventually takes off with the aid of a strong wind. Nearly 12 months after their arrival at Pukekura, having cared for egg and chick over a period of 300 days, the albatross parents leave the colony to spend a year at sea before returning to breed again.

The young albatross spends the first three to 10 years at sea; many then return to this unique headland to start another generation of royal albatross on Pukekura.

Their 24-hour livestream is on during the breeding season.

Watch more nest videos on TKSST, including:
• A Pileated Woodpecker and Blue Jays on Cornell FeederWatch
• Cornell Lab of Ornithology’s Great Horned Owl Live Cam
• A puffin and its puffling surface from their underground nest
• Hummingbird hatchlings in their nest with mother Rosie