Eastern hellbenders live throughout the Appalachian region in the United States. Their ancestors have been on earth for around 160 million years, but in the last several decades their numbers have dropped dangerously in several states, primarily due to habitat destruction. Eastern hellbenders are endangered in Maryland, Missouri, Ohio, Illinois and Indiana.

In this episode of NPR’s Maddie About Science, Maddie Sofia helps conservation biologist Greg Lipps and a group of local volunteers return eastern hellbender salamanders to Southeastern Ohio’s Yellow Creek. If the harmless aquatic amphibians successfully adapt to their habitats, and if their habitats are kept healthy and protected, the animals will hopefully thrive and reproduce during their 30-year lifespan. The hellbenders are microchipped so that scientists can track the program’s impact.

So, how does a scientist get his hands on baby hellbenders?

First, Lipps collects hellbender eggs from nests. Then, he teams up with the Toledo and Columbus Zoos in Ohio to raise the salamanders from eggs until they are big enough to stand a chance in the wild.

When the babies are about 3 years old, a team of zoo staff, members of environmental groups, scientists and local residents get together to release the hellbenders back into the Ohio creek system. 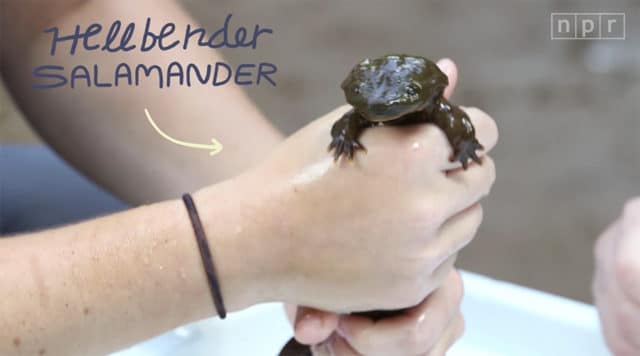 Next, watch Save The Salamanders, unsung heroes of the forest and The Japanese Giant Salamander.

The Fish That Walk on Land, an animated introduction to amphibious fish