The jungle is a tough place for an injured 18-year-old Royal Bengal Tiger like Jawara. Luckily, he received help from animal experts at India’s Wildlife SOS after his teeth and paw were harmed in a poacher’s snare.

In this clip from National Geographic‘s Jungle Animal Rescue, Kartick Satyanarayan and his team encourage Jawara to return to a protected portion of forest after a stay in their Bengaluru-based recovery center. Note: Chicken parts, used as a lure trail, are clearly shown. From Wikipedia:

“The tiger is a carnivore. It prefers hunting large ungulates such as chital, sambar, gaur, and to a lesser extent also barasingha, water buffalo, nilgai, serow and takin. Among the medium-sized prey species it frequently kills wild boar, and occasionally hog deer, Indian muntjac and grey langur. Small prey species such as porcupines, hares and peafowl form a very small part in its diet. Because of the encroachment of humans into tiger habitat, it also preys on domestic livestock.”

In the wild, conservationist Reed Harrison explains, “a tiger with injuries similar to Jawara’s is not really able to hunt as he once would have.” The sanctuary’s forested enclosure will allow him to live safely and relatively free. 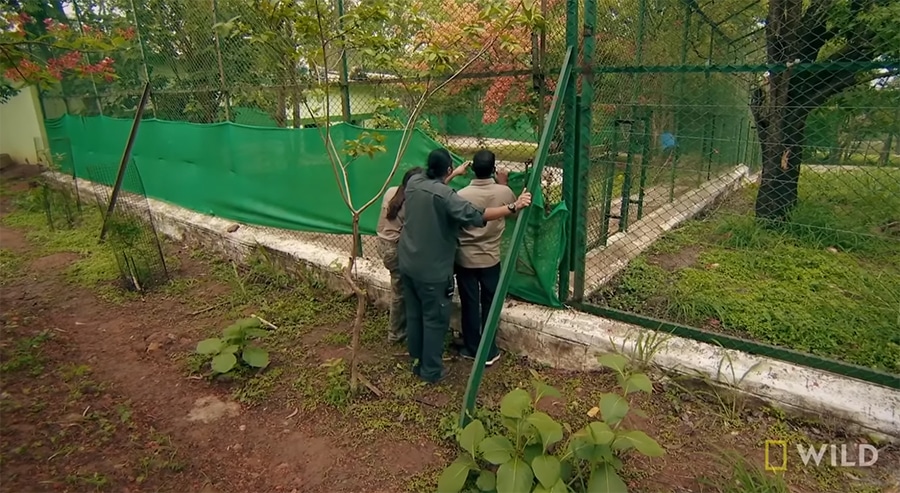 Related reading: “Every jungle is a forest but not every forest is a jungle.”

Plus, watch more videos about India, endangered species, and conservation on this site.