In lockdown in New South Wales, grieving Australian sheep farmer Ben Jackson honored the memory of his late aunt Debra Cowdery with his flock of hungry sheep arranged in the shape of a heart. See it in the silent video above.

Unable to attend his aunt’s funeral in person, the Gurya-based farmer created the video for his family to play in a slideshow at the funeral in Brisbane. “I basically just put the grain in the shape of a love heart—took a couple of tries—and yeah, got a drone up, and fortunately… it turned out quite well,” Jackson explained in a television interview. 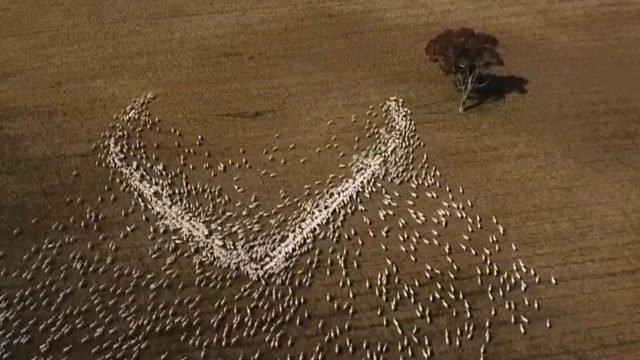 The moving tribute, accompanied by Simon and Garfunkel’s song “Bridge Over Troubled Waters”, was shared by Jackson on Instagram and by a family member on Twitter. It has since gone viral. More from The Washington Post:

“The realization of not being able to go and say ‘cheerio’ sunk in, and I felt completely and utterly helpless and hopeless,” Jackson said. “It hurts. It hurts a whole bunch.”

Jackson, a sheep farmer, had created art with his livestock in the past. During droughts, he would trail-feed his sheep by dropping grain out of the back of a truck. After doing that twice a day for months on end, “the brain and the soul get very crushed.”

To make the task more interesting, Jackson started laying the grain in the form of patterns and words. The sheep were trained to find the barley and would stick around to eat for about five minutes before wandering off. He started catching their actions from above using a drone and would share the videos on Instagram… He had not posted much sheep art lately, but when his aunt died, Jackson said he had “a thunderbolt moment.”

“My Aunty Deb had one of the biggest hearts known to me,” he said. “Why not try to make a heart that showed just how big it was?”

Ben and a mob of singles organised a tribute to his Aunty pic.twitter.com/R33SuN6YoK

Watch these related sheep and mourning videos next:
• Sheep herding patterns as seen by a high-flying drone
• After the Rain: A shepherd and his dog turn wool into clouds
• Newborn Valais blacknose lambs at Windfold Farm
• The Grieving Process: Coping with Death
• Motoi Yamamoto’s intricate, temporary salt installations

The Sea Is Blue

The Grieving Process: Coping with Death

The Cloudy Dog Talks About…