A Short History of the Nightingale, animated

The nightingale, “a bird many have heard of, but few have seen.” This informative animation, A Short History of the Nightingale, was created by British animation director Will Rose and narrated by Samuel West. It chronicles how the nightingale’s song “became famous around the world, how it was a prized possession in Victorian times, and about the perils it faces during its migration between Europe and Africa.”

The animated short is part of a documentary by Sunbittern Media‘s Luke Massey and Katie Stacey: The Last Song of the Nightingale. The conservation-minded film focuses on the decreasing numbers of nightingales in the United Kingdom.

The film excerpt below shares some of the same animated scenes and then continues into live-action footage. From Sunbittern’s The Nightingale & The Bomber:

In the spring of 1924, the first ever live-to-radio broadcast, from an outdoor location, was a duet between cellist Beatrice Harrison and a singing nightingale in her garden in Surrey. A million people listened in and the programme was picked up as far afield as Italy, France, Spain and Hungary. Over 50,000 fan letters were received and the nightingale live-broadcast tradition was maintained as an annual event, by the BBC, until May 19th, 1942.

As the BBC began the 18th annual broadcast the microphones picked up the sounds of 197 Wellington and Lancaster bombers en route to Germany. Realising a live broadcast of the bombers could warn Nazi spies of the impending attack, the broadcast was quickly cancelled. However the lines were still open and both nightingale and bombers were captured on acetate disc – a haunting combination. 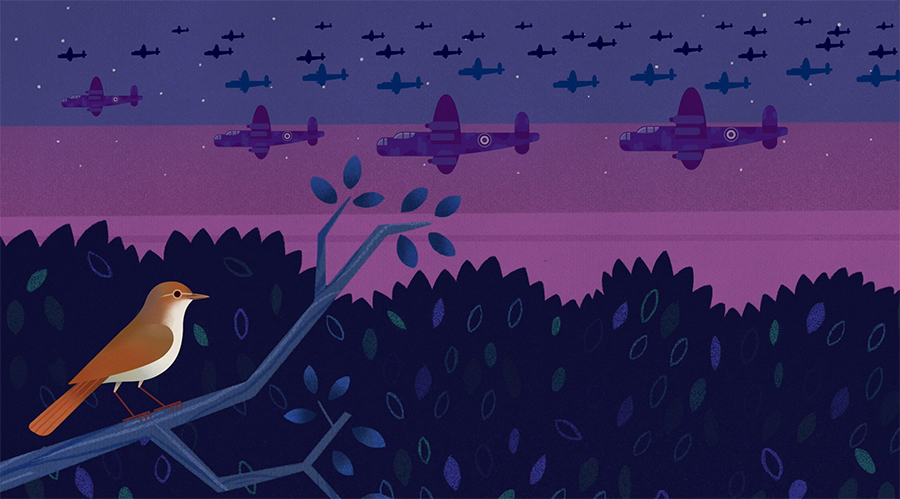 In remembrance of this astonishing event, renowned street artist, ATM, painted a nightingale on the tail fin of a Vickers Wellington Bomber.

Watch these related videos about birds and migration next:
• By The River, an animated introduction to 5 kinds of birds
• Bird migration, a perilous journey – TED Ed
• British Birdsong, an illustrated montage of sound
• The Cornell Lab of Ornithology’s Bird Song Hero
• Plantpot Parabolic, a DIY reflector for recording birdsong on a smartphone

The Whooping Cranes of Texas