Starling murmuration, an enthralling five minutes in the Netherlands

Shimmering, pulsing, twisting, expanding, contracting, overlapping, breaking, and reconnecting, almost like particles in the waves. Spend five calm minutes watching thousands of starlings fly back and forth across the sky at dusk. This murmuration, the term for a shape-shifting flock of starlings, was filmed by photographer Marco Valk in Geldermalsen in the Netherlands. Full screen this video at the highest resolution you can handle.

According to the RSPB, England’s The Royal Society for the Protection of Birds, this “mass aerial stunt” can offer safety in numbers: “…predators such as peregrine falcons find it hard to target one bird in the middle of a hypnotising flock of thousands.” 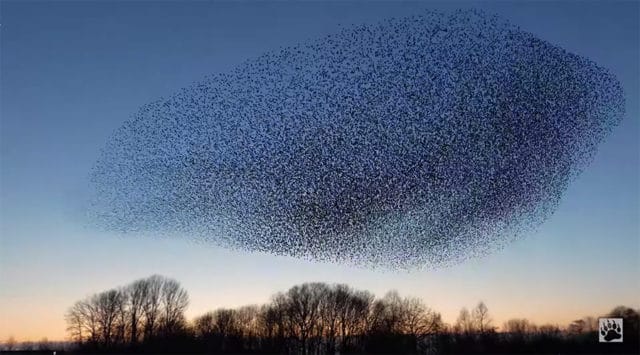 Peregrine Fund senior scientist Grainger Hunt concurs that “these aerial spectacles are caused by a falcon near the edge of the flock. It turns out that the beauty of a murmuration’s movements often arises purely out of defense, as the starlings strive to put distance between themselves and the predator.”

But how do the birds fly so cohesively and closely together? A brief 2013 note from Princeton:

Working with a team of Italian physicists, Professor Naomi Leonard and colleagues found that flocking starlings strike an optimal balance between the work of responding to social cues from their neighbors and the need to conserve energy. This trade-off yields a special number: seven. When starlings coordinate with their seven nearest neighbors, they form their characteristic flocks with the least effort. 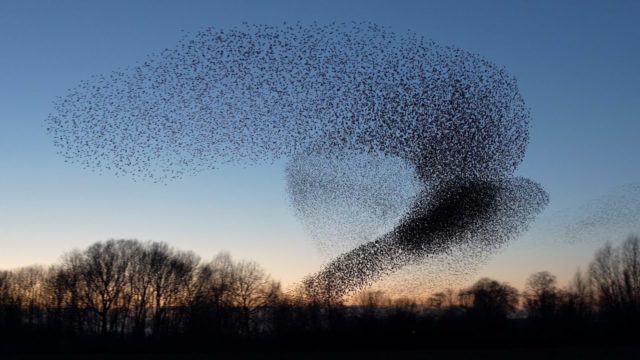 Starling murmuration, a stunning clip from Jan van Ijken’s ‘The Art of Flying’

Lasers vs Poop: Startling millions of starlings in Rome

Data in data out: the flight paths of starlings

Caught in a canoe under a murmuration of starlings (2011)