Tapanuli orangutan, a new species filmed for the first time

A population of orangutans was found in an isolated area of Sumatra in 1939, but they weren’t named as a new primate species until 2017. Today, there are only around 800 Tapanuli orangutan (Pongo tapanuliensis) living in the wild.

They are smaller and have paler, thicker fur than their lowland cousins. Scientists believe these are adaptations for living at altitude. But like all the orangutans, the bond between an infant and its mother is one of the strongest and longest in the natural world.

According to co-author Dr. Marina Davila-Ross, the Tapanuli orangutans differ “genetically, morphologically as well as behaviorally from the Sumatran and Bornean orangutans” in significant ways. And from The Guardian, “The long booming calls of the Tapanuli males differ from those of the two other known species,” as well.

Watch them cuddle and climb in the forest canopy in this rare footage from Nature: Primates, a three-part miniseries on PBS. The episodes premiere on Wednesdays from November 4th through 18th, 2020. 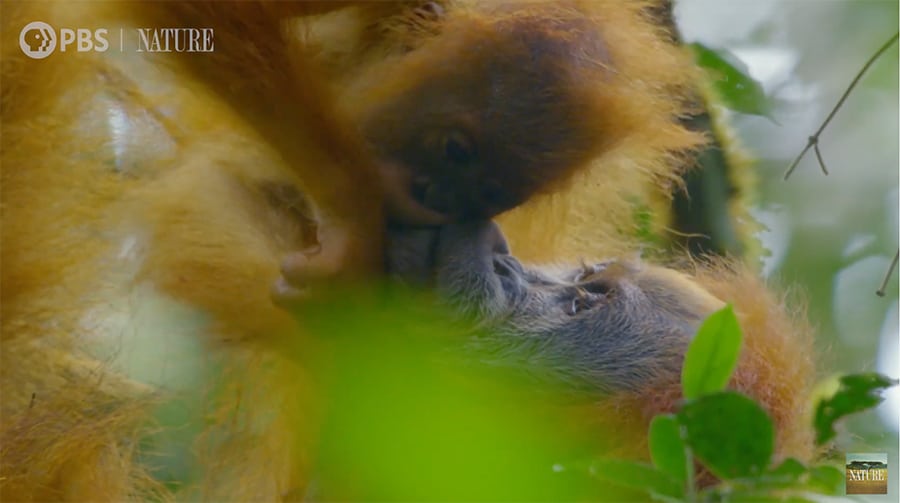 Then watch more primate and orangutan videos:
• Baby orangutan Peanut doesn’t want to climb the ropes
• Orangutan Smile: A mother orangutan cuddles her baby
• An orangutan mother teaches her daughter how to survive in the Sumatran rainforest

The animatronic animals of Spy in the Wild

Orangutans use iPads to order lunch and more

How does a chick hatch from an egg?

Elephant Architects of the Okavango