This huge predator had the largest eye known of any animal which would have given it extremely acute eyesight. Not only that, but the eye was surrounded by a ring of scutes — bony plates — to protect it from the water pressure at depth.

So, with eyes the size of footballs, this monster was able to hunt at all depths of the Jurassic ocean. It also had rows of sharp teeth that would have allowed it to rip apart almost anything. These teeth are shaped like blades.

Sir David Attenborough is describing Temnodontosaurus, an early Jurassic-era ichthyosaur that could grow up to 10‭ ‬meters (almost 33 feet) long… or more. The 2019 clip, filmed in Stuttgart’s Natural History Museum, is from Attenborough and the Sea Dragon, a Nature PBS video. 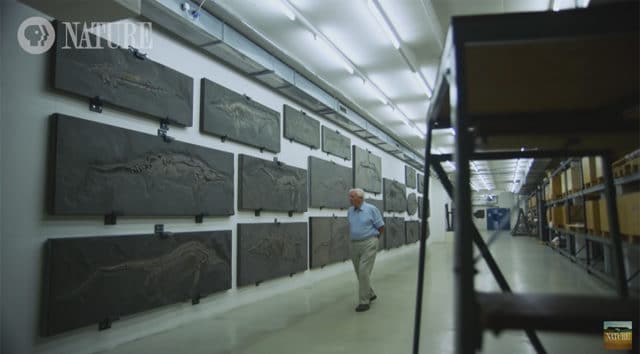 The first ichthyosaur skull ever discovered was that of Temnodontosaurus platyodon. The specimen (BMNH 2149) was found in the Lias of Lyme Regis by Joseph Anning in 1811. The rest of the skeleton was recovered in 1812 by his sister, Mary Anning, but has been lost since. The ichthyosaur was subsequently described by the anatomist Sir Everard Home, in what was the first scientific description of an ichthyosaur.

Attenborough explains, “People thought it was some kind of monster, but what was it? They thought it was a kind of cross between a reptile and a fish, so they called it a ‘fish lizard,’ or ‘sea dragon.'” Find the full episode here.

Then watch these paleontology videos next:
• Mary Anning, the greatest fossilist the world ever knew
• What are the Crystal Palace Dinosaurs?

Uncovering the Secrets of Mole Motion