Speaking from the perspective of a Benin bronze plaque from the Kingdom of Benin, London-born Peabody Award-winner George Mpanga, known as George the Poet, recites his spoken-word poem titled The Benin bronze.

The 2015 performance, filmed in The British Museum’s Africa Gallery, tells the story of these royal sculptures as a part of Huge History Lesson, a 7-step history enquiry project for investigating museum objects.

Huge History Lesson was designed for 11 to 14-year-old students but can be tailored for a much wider audience depending on the questions and the museum objects. Supported by Arts Council England, the program was a collaboration by TES and The British Museum.

“I used to live on a wall of a palace. Until I was torn off in malice…

“And what was once the royal decor, had now become the spoils of war.”

The first and last lines bookend a poem that provides great detail, including how Benin royalty traded with the Portuguese during the 1500s and 1600s, followed by trade with the Dutch and English.

And how, when the Oba of Benin, the king, ended trade with the British in 1896, an unsanctioned conflict led to a British invasion of the Kingdom of Benin the following year. 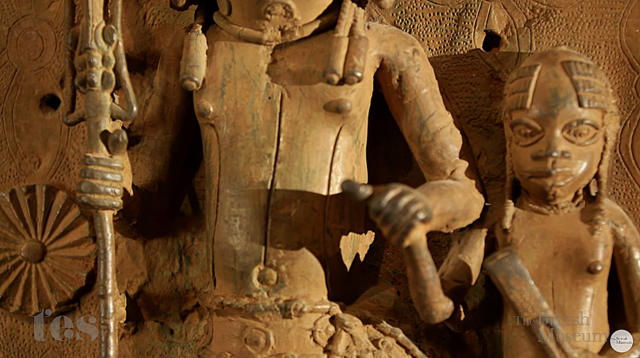 More about the artworks from The British Museum:

“The ‘Benin Bronzes’ (made of brass and bronze) are a group of sculptures which include elaborately decorated cast plaques, commemorative heads, animal and human figures, items of royal regalia, and personal ornaments. They were created from at least the 16th century onwards in the West African Kingdom of Benin, by specialist guilds working for the royal court of the Oba (king) in Benin City…

“Among the most well-known of the Benin Bronzes are the cast brass plaques which once decorated the Benin royal palace and which provide an important historical record of the Kingdom of Benin. This includes dynastic history, as well as social history, and insights into its relationships with neighbouring kingdoms, states and societies. The Benin Bronzes are preceded by earlier West African cast brass traditions, dating back into the medieval period.” 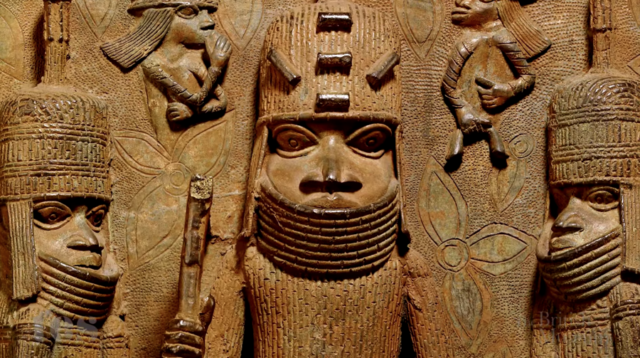 “One element of the history of the Kingdom of Benin represented on the brass plaques and sculptures is the kingdom’s early contacts with Europeans. Trade and diplomatic contacts between Benin and Portugal developed on the West African coast from the 15th century. These early connections included Portuguese and Benin emissaries voyaging between the capitals and courts of Benin and Portugal as these two powers negotiated their new relationship.” 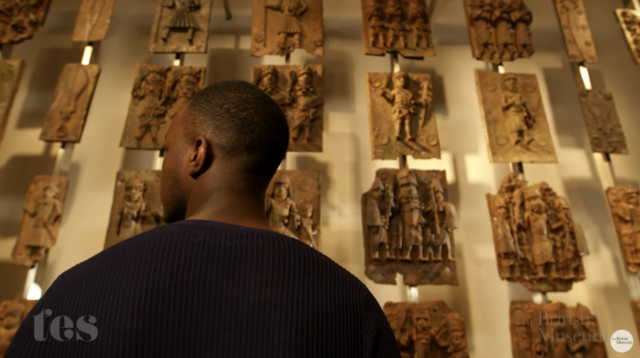 George the Poet is of Ugandan heritage. Via the Smithsonian, “The Kingdom of Benin, home of the Edo peoples, is located in the southwest tropical forest and mangroves region of present-day Nigeria.”

Watch this next: What will The British Museum do with the stolen artifacts in their halls?

Plus: The untold history of ironworking in central and west Africa.