Go behind-the-scenes with multiple teams at the Museum of Modern Art in New York City as they prepare for two exhibition openings, Louise Bourgeois: An Unfolding Portrait and Max Ernst: Beyond Painting. The video above, titled Pressing Matters, is the third in MoMA’s 8-part documentary series At the Museum. Curators wrestle with decisions about art placement, lighting is meticulously observed and planned for, art is carefully unpacked and installed, including Ernst’s Adam and Eve Expelled from the Garden of Eden and Bourgeois’ Spider (Cell):

Louise made many variants of Spider, but there is only one unique_ Spider/Cell,_ and it’s the first time where the web of the spider is represented as an enclosure. Of course we can’t now, but you are meant to enter that piece and sit in the chair and be underneath the protection of the mother. The spiders were an ode to her mother who was a tapestry restorer, and that’s why you see tapestries on the walls of the exterior of the cell.

Learn more about Bourgeois with the picture book Cloth Lullaby: The Woven Life of Louise Bourgeois.

In episode one of the series, museum teams are in the process of methodically shipping 200 masterworks, including Andy Warhol’s Soup Cans, Mark Rothko’s No. 10, Willem de Kooning’s Woman I, Gustav Klimt’s Hope II, and Yayoi Kusama’s Accumulation 1, to Paris for the Being Modern: MoMA in Paris exhibition at the Louis Vuitton Foundation.

Watch more from MoMA’s At the Museum series. 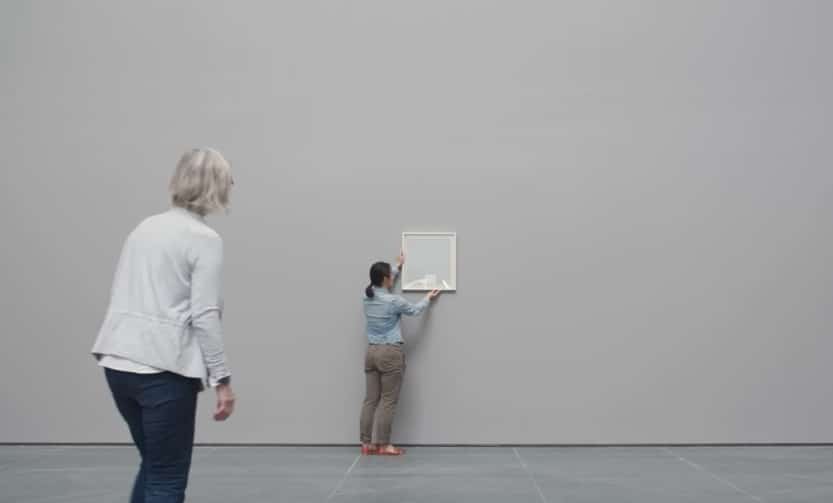 Watch more museum videos on this site, including these favorites: Relighting “Circus Sideshow (Parade de cirque)” by Georges Seurat, The Challenge of a Straight Line and ‘Making Art Concrete’, Colleen Moore’s Fairy Castle Restoration at MSI Chicago, and installing massive statues with engineering and care at the Met.

The hidden art of fore-edge painting