Every month at Costa Rica’s Ostional National Wildlife Refuge, tens to hundreds of thousands of female sea turtles arrive, often within a few days of each other, to lay their eggs on the beach.

Biologist Vanessa Bézy has been studying this remarkable phenomenon, known as a mass arrival, or arribada in Spanish, for years. As part of her research, she filmed the reptiles, mostly olive ridley sea turtles, aggregating in the ocean before reaching shore. One lucky day, she recorded, via a drone, an immense gathering of the creatures—the greatest density of sea turtle species ever recorded.

National Geographic shared this phenomenal sight, rare footage filmed in November 2016 by Vanessa Bézy, to promote awareness around habitat protections for these sea turtles. These animals are under threat from over-development and mass-tourism in key breeding sites like this one.

Bézy also founded Nosara Sustainability, a local non-profit dedicated to the protection and conservation of sea turtles and other wildlife within the Costa Rican refuge. 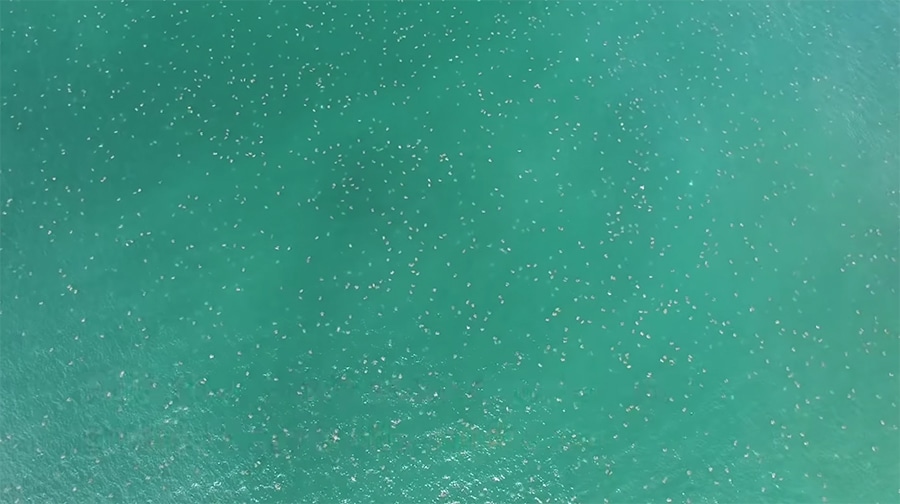 Why do sea turtles matter? From the World Wildlife Fund:

Sea turtles are a fundamental link in marine ecosystems. They help maintain the health of sea grass beds and coral reefs that benefit commercially valuable species such as shrimp, lobster and tuna. Sea turtles are the live representatives of a group of reptiles that have existed on Earth and traveled our seas for the last 100 million years. Turtles have major cultural significance and tourism value.

Watch this next: Olive Ridley Sea Turtle hatchlings scurry out to sea and TED-Ed’s The Survival of the Sea Turtle.

The Survival of the Sea Turtle