“In the heart of Guédelon forest, in an abandoned quarry, a team of master-builders is building a 13th-century castle from scratch. Quarrymen, stonemasons, carpenter-joiners, woodcutters, blacksmiths, tilers, carters and rope makers… are working together to revive heritage craft skills and to shed light on the world of medieval construction.”

Treadwheel or treadmill cranes are an essential part of that construction. Tom Scott demonstrates how 13th-century treadmill cranes work in this video at Guédelon Castle, a “castle that would’ve belonged to a low-ranking, local, fairly modest nobleman” in northern Burgundy, France. 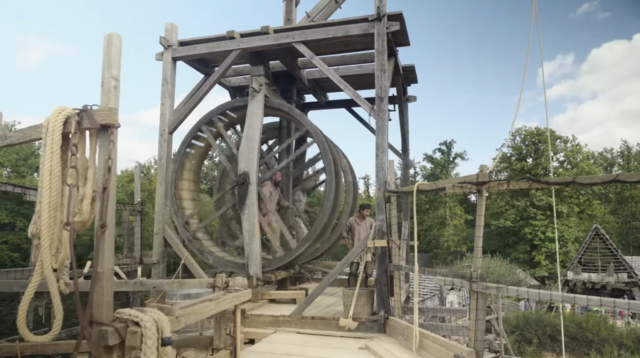 “When we laid the first stone we said it was the year 1228 and each year we move forward in history. So this year on site, you are in the year of our lord 1253. So in order to find out what technology was available at that time, we have a number of different sources: We use illuminated manuscripts, stained glass windows, financial records. Of course we work with archeologists, art historians, and castellologists…” 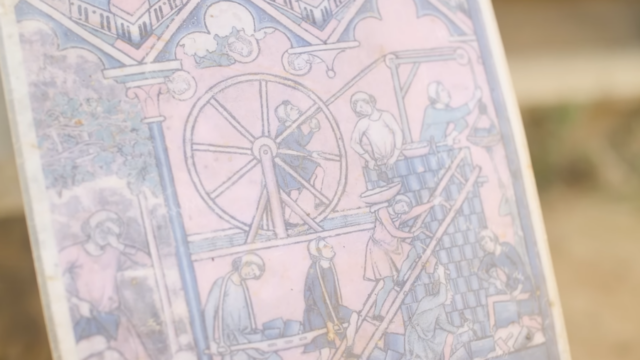 “This is a technology that goes back to Roman times but which is being used in the 13th century in cathedral construction. We know that they were in use because there are a number of medieval cranes that still exist in the roof timbers of cathedrals.”

Stonemason Perrine Marin explains that lifting rocks with this particular crane is like walking up five flights of stairs. For Scott’s demonstration, she stations herself at the wheel’s wooden brake, a contemporary safety addition. 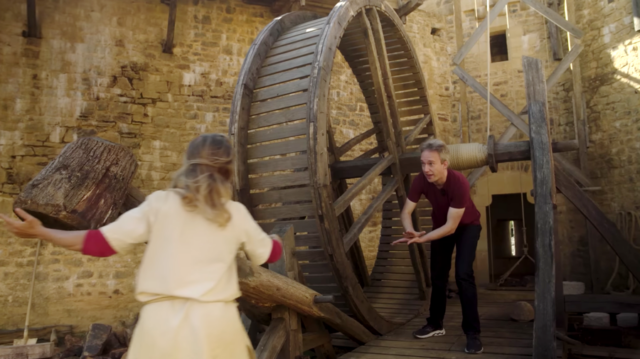 Watch more from Tom Scott on YouTube. Related photo gallery in The Atlantic: Building a 13th-Century Castle in the 21st Century.

Tires on a ski jump, a competition clip from Japanese television