“Downtown Portland seems to be a very inviting place for crows and I think the reason for that is due to the presence of garbage and food and lights and warmth, and it’s a relatively predator-free environment,” [bird biologist Adam] Baz says.

Crows have always been attracted to downtown Portland, but a few years back Jeri Jenkins of Portland Mall Management began to get complaints.

Jenkins’ group is responsible for maintaining much of the infrastructure on Portland’s Transit Mall. So, as the crows increased, so did Jenkins’ headaches.

“They left us a lot of droppings on the sidewalk to clean up, so much so that it just became impossible to keep up with it.”

…that is until Jenkins put two solutions into place: A Zamboni-style sidewalk cleaning vehicle that’s been nicknamed the Poopmaster 6000, and some urban falconry, specifically a small fleet of Harris hawks. Along with their dedicated falconers, these raptors are deterring the crows’ interest in roosting within the project’s 63-block focus. Oregon Public Broadcasting shares the story in this video. 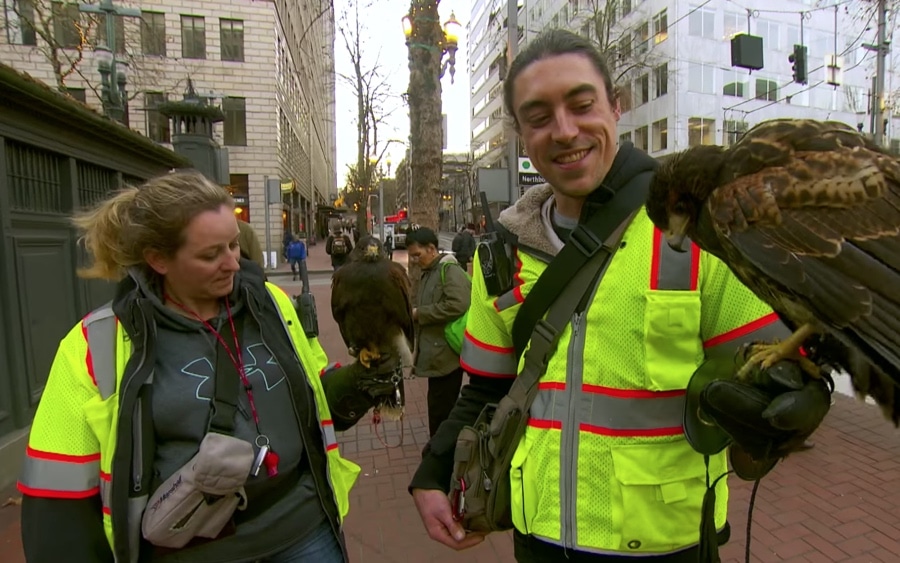 Plus, a bit more about these swarming birds, 10,000 strong at the height of their downtown occupation:

“Crows are incredibly intelligent. They are some of the most intelligent species of birds on earth and part of the reason they’re so intelligent is because they are highly social and so they learn from one another,” explains Baz, who is also part of Clayton’s falconry team. “We’re hoping that by teaching this group of crows that (downtown) is not a particularly safe place, they will teach other crows to find safer, more sustainable places to spend the night.”

Learn more about crow communication in this Deep Look video: You’ve Heard of a Murder of Crows. How About a Crow Funeral? …as well as this Tumble podcast episode: The Mask of the Crow Scientist.

Next, watch The Goat Brigade: Preventing Wildfires in Southern California, Barn Owls: The Secret Saviors of Napa Valley’s Vineyards, and 1,000 Indian Runner ducks are a smart alternative to pesticides.

Bonus: The ultimate problem solvers? A wild crow solves a puzzle in 8 parts.