Born in 1912 into a family of musicians, Viola Smith was not only an excellent drummer, she was a high-profile advocate for female musicians and a trailblazer as one of America’s first professional female drummers. Above: Viola Smith Drums with Frances Carroll & Her Coquettes (1939). Their number: Snake Charmer.

Just after celebrating her 100th birthday, Viola Smith sat down with Tom Tom Magazine for a video interview about her life in music. In it, she explained:

“[My five sisters—the Schmitz Sisters Family Orchestra] had the rest of the instruments, and by the time there was a sixth one added to the family orchestra, my dad decided it should be drums which was great for me. What better instrument to play than the drums.”

But making space for her talent in the male-dominated big band scene of the 1940s was difficult. Some context from Not So Modern Drummer:

Being in an all girl band in the 40s was considered a “temporary” job — female musicians during World War II were “swing shift Maisies,” like Rosie the Riveter — substitutes for the real thing – men. The all girl bands were considered patriotic, temporary musical groups meant to entertain the soldiers. In an effort to encourage more bands to hire female musicians, Viola wrote an article for a 1941 edition of Down Beat magazine entitled “Give Girl Musicians a Break!” … and history shows that it worked.

Smith went on to perform with the legendary Ella Fitzgerald and jazz drummer Chick Webb, appeared on Ed Sullivan, and performed President Harry Truman‘s second inauguration in 1949. She was also billed as “the fastest girl drummer,” paving the way for other female musicians, including those in her all-female orchestra, The Coquettes, which included her sister Mildred on bass. 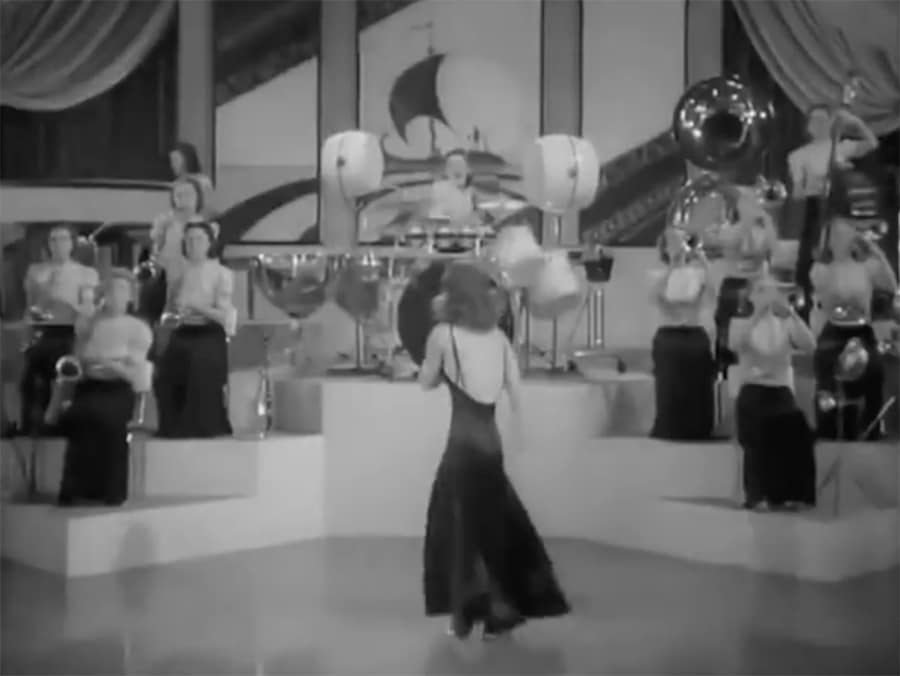 Update from The Washington Post: Smith passed away in her Southern California home in 2020, just a few weeks shy of her 108th birthday.

In the archives, a growing amount of hoppin’ swing music videos and…
• The Oral History of Female Drummers
• How drums are made
• Max Roach on hi-hat
• Nirvana drum cover by 9-year-old Nandi Bushell

The Wikidrummer: No artificial reverb added

The map of notes on a steel pan drum

The Djembe, an instrument played for the king of Mali