Herpetologist Earyn McGee is a graduate student studying natural resources with an emphasis on wildlife conservation and management. She also leads a popular #FindThatLizard photo activity on Twitter and Instagram. In the video above, she answers the question, “What does a herpetologist do with a lizard once she’s caught it?” 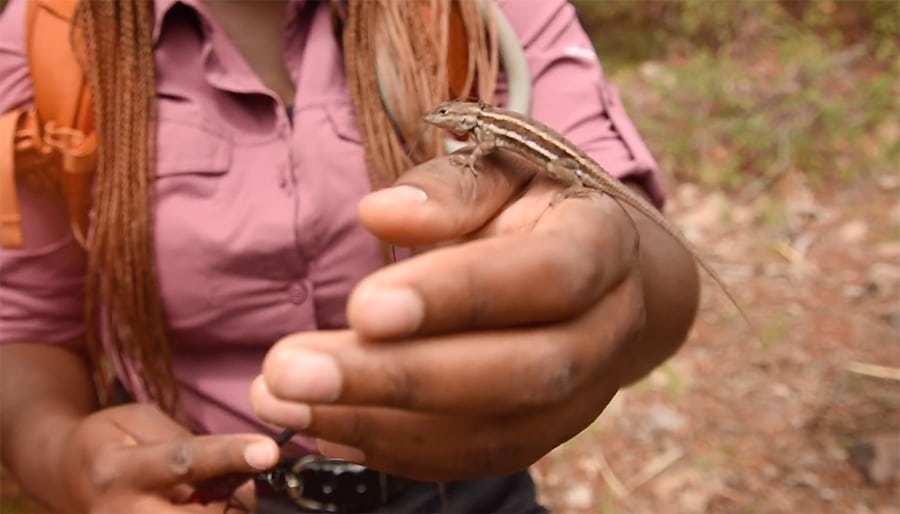 The answers: She holds it with care, takes photos of it in its habitat, measures and weighs it, she numbers it, finds out what sex it is, checks for mites and if it’s shedding, gets a fecal sample, and sets it free unharmed.

She also demonstrates how she catches lizards in the first place: With a small lasso. “Any fishing line that isn’t too heavy should be fine,” she instructs in an exchange with TKSST. “Whenever a lizard is on a lasso its body should be supported. Never dangle or swing a lizard on a lasso.”

In herping, this practice is traditionally called noosing, but McGee improves her field of study with intentional use of the term lassoing. “As a black person in a predominantly white field,” she explains at 2m25s, lassoing is a cognizant move toward more positive connotations,” and also, I don’t want you to think of it as we’re hurting the lizards because they’re not injured by this.” 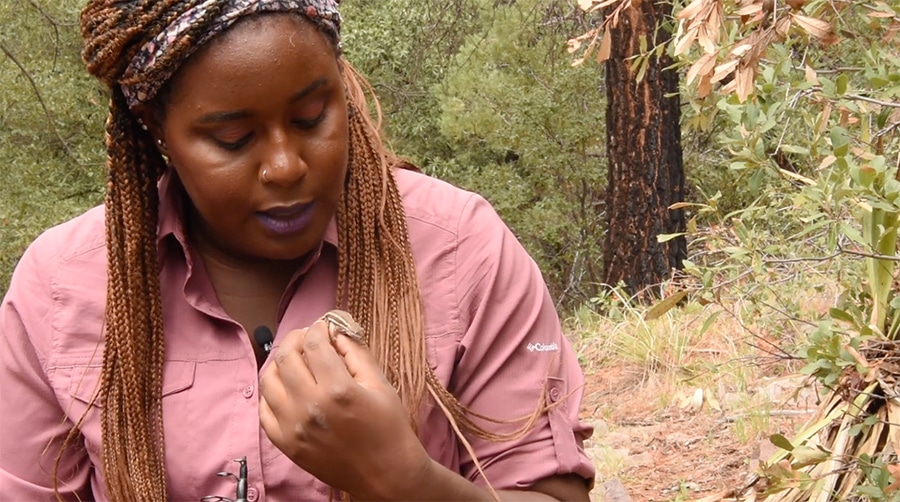 When did she first get interested in ecology? She tells more of her story in an Ecologist Spotlight interview with Rapid Ecology:

I have always been interested in animals. My clothes were always covered in dirt and mud growing up because I loved being outside, attempting to catch any critters I laid eyes on. I always wanted to know how animals survived in the “wild.” What did they eat? Where did they sleep? How did they survive the elements (i.e. heat, cold, snow, etc.)?

Growing up I wanted to be a veterinarian because I thought that was the best way that I would not only be able to interact with animals on a daily basis but be able to help them as well. During my freshman year of undergrad at Howard University, one of my friends, Robert, suggested I apply for the Environmental Biology Scholars program (EBS). The EBS program paired undergraduate students with one of three professors in the biology department, Dr. Mary McKenna, a botanist, Dr. Hemayet Ullah, a molecular biologist, and Dr. George Middendorf, a herpetologist. I was matched with Dr. Middendorf. The program supported my student research for 2 academic years and two summers. We worked on a population of Yarrow’s Spiny lizard (Sceloporus jarrovii) in the Cave Creek Canyon of the Chiricahua Mountains. During my first summer I feel in love with research. I was able to work with animals and address some of the natural history questions that I had always been interested in.

Why Warm Blood is Better Than Cold – Rise of the Mammals