At 125 decibels, the male white bellbird (Procnias albus) has been named the “World’s Loudest Bird,” or more accurately the loudest bird ever recorded, in a 2019 study [pdf]. Found in the mountain forests of the north-eastern Amazon—”in the Guianas, with small numbers in Venezuela and the Brazilian state of Pará“—the birds’ call sounds metallic, like an electronic warning system alarm.

Hear the white bellbird, the loudest bird ever recorded, in the above video by Anselmo d’Affonseca. Behind-the-scenes details from Discover Magazine:

Along with some hired locals, longtime friends [Mario] Cohn-Haft and [Jeffrey] Podos hiked up to the birds with a recorder and a laser pointer. Typically, recording sound volume requires careful calibration, Podos says. But the team used a new device that picks up sound amplitude almost instantly. When the team saw how precise the readings were, “it was awesome,” Podos says. “It’s just like gold.” Those values, paired with the distance-reading function of the laser, let the researchers calculate how many decibels the birdsong could reach.

Compared to the screaming piha, a relative to the bellbird that was previously considered one of the loudest known birds, the white bellbirds sing over 9 decibels louder. The song males sing most often can reach 116 decibels, while the version they sing to females can reach 125 decibels. Though it’s hard to compare vocalizations amongst species, Podos says, these calls are louder than those of howler monkeys, or a chain saw operating three feet away. 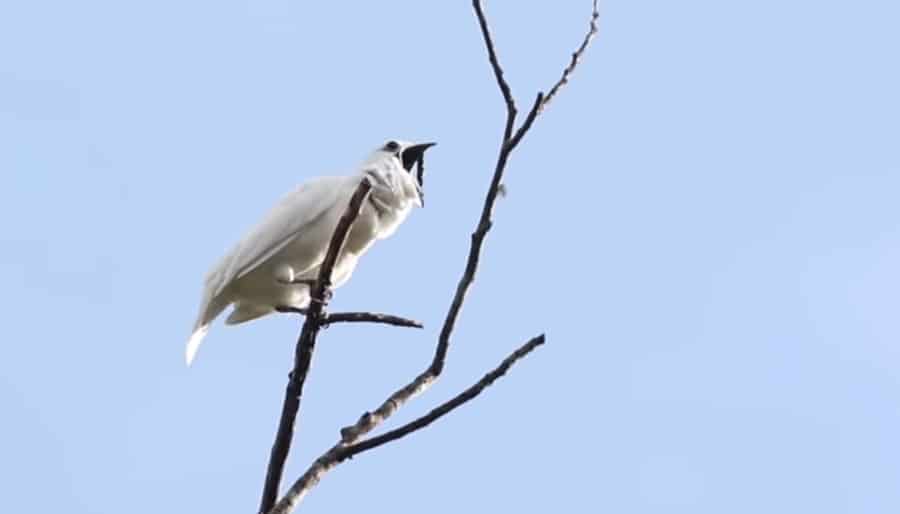 In the study [pdf], Jeffrey Podos and Mario Cohn-Haft explain:

On several occasions we observed female white bellbirds joining males on their display perches. In this context, the male first adopted a head-down/tail-down posture, back towards the female, wattle fully distended. He then sang only his higher amplitude (Type 2) song, swiveling dramatically midsong to face the female head-on for the song’s second note. Females in these interactions always retreated as or just before the male sang, yet still experienced songs at very close range, sometimes within four meters or less.

They do note, however, that they never witnessed a successful pairing so they’re not sure what kind of call wins a mate. Here’s another example, filmed by Raimundo Carvalho:

Read more about the white bellbird at Audubon.org and from Smithsonian Magazine.

Watch these videos next: The bell-like call of the Three-Wattled Bell Bird and What’s the Loudest Possible Sound?

Plus, from TED-Ed: How Do Birds Learn to Sing?