Heed Atlas Obscura’s warning: “This video contains footage of flesh-eating beetles and carcasses.” There are a few brief bird de-feathering moments and lots of long-gone bird bodies in a variety of graphic states this profile of The Field Museum‘s dermestid beetles.

Bird department collections managers Ben Marks, an evolutionary biologist, and Mary Hennen, an expert in dermestid beetle care and Director of the Chicago Peregrine Program, take us behind-the-scenes to meet some of the museum’s “hardest-working employees.”

In fact, it’s the family business: The same lineage of scavenger beetles has been cleaning the flesh off of bird specimens as a part of their scientific preparation at the museum for the last four or five decades. “To date, the beetles have helped researchers add about 80,000 migratory birds to the Field Museum’s growing database.” 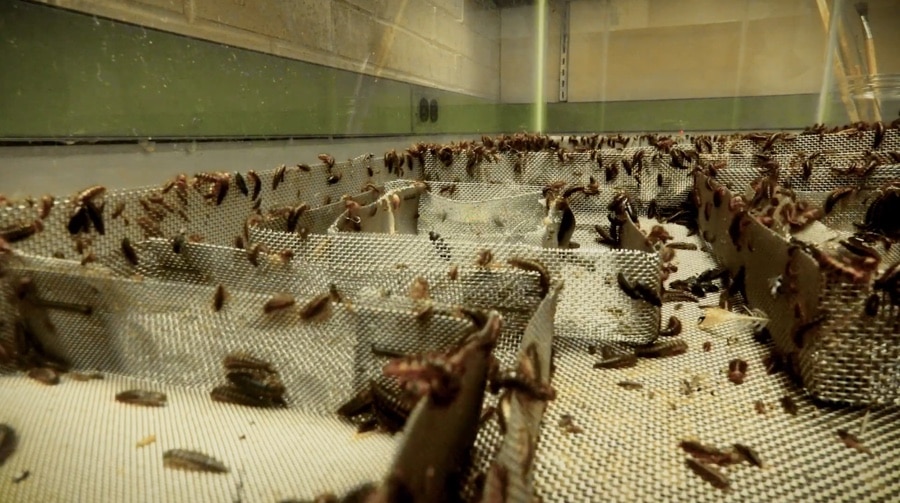 There are approximately 500 to 700 species of dermestid beetles worldwide. Read more about the Field Museum’s scavenger team from Atlas Obscura in 2014:

Dermestid beetles are well known to taxidermists and have been used in natural history museums since 19th-century France. The scavengers are even sometimes known as “museum beetles.” It takes a colony from a few days to a few weeks to remove all skin, brains, and guts from a deceased animal, leaving its clean bones ready for museum use. The Field Museum’s beetle room is filled with drying racks for carcasses (dermestid beetles won’t eat moist flesh), nine tanks where the work gets done, a freezer where the finished skeletons are held until they’re needed, and literally millions of beetles.

Follow this video with Anatomy of Preservation: Fruit bat, from a Specimen to an Object of Study, the world’s largest collection of whale bones, and 3D scanning an anglerfish’s final meal.

Plus: Why are museum collections so important? Sir David Attenborough explains.

Skull of the Olinguito and the importance of holotypes